7 years ago
The hopes of people living in developing countries

What is development? UNDP defines human development as ‘the expansion of people’s freedoms and capabilities to lead lives that they value and have reasons to value.’ In other words. people in developing countries strive to move up the ladder of development in order to meet their basic needs and to have the opportunity to lead richer, more fulfilling lives 1.

UNDP’s Human Development Index (HDI) is the most used tool to measure development. The HDI scores and ranks each country’s level of development based on three development indicators, namely income, health and education.

A country scores a higher HDI when the life expectancy at birth is longer, the education period is longer, and the income per capita is higher. Achieving these goals is the hope of people living in developing countries. This is because a developing country is a country which has a less developed industrial base and a low HDI. As it has a less developed industrial base, it tends to have a huge agriculture base and sometimes, therefore, a developing country is viewed as a poor agricultural country that is seeking to become more advanced economically and socially. Malaysia and Indonesia, the two largest oil palm countries in the world, fall under this category.

France, USA and Australia are three countries that are classified as developed economies according to United Nations2. The results in Table 1 show that they have very high HDI values; being 0.888, 0.915 and 0.935 respectively. They are within the top 25 countries in the world in terms of development. As such, they are countries considered to have attained ‘very high human development status’.

On the other hand, Indonesia and Malaysia, are ranked very far down at 110th and 62nd positions in terms of development, with HDI of 0.684 and 0.779 respectively. The human development status for these two countries are at medium level.

People in the developed countries of France, USA and Australia also live longer, on an average of 7.6 years more, than people in Indonesia and Malaysia (Table 3).

Agriculture is an important economic activity in Malaysia. In 2015, it contributed to 5.3% of the country’s Gross Domestic Product (GDP). The palm oil industry is the highest contributor to GDP generated in the agriculture sector, amounting to 46.6% of the total as seen in Figure 1. This compares markedly with the 2nd biggest contributor which is the fishing industry contributing only 10.8%.The oil palm industry definitely contributes significantly to the country’s development. 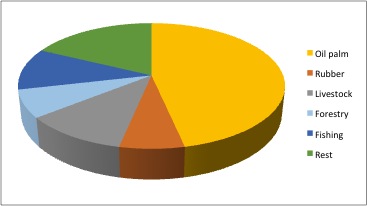 Do the small oil palm farmers benefit? The answer is positive as a survey carried out in 2008 in Felda for the organized small farmers showed that they earned RM1,386 monthly. This income is 2.6 times higher than the national poverty income level of RM529 for the country5. Income of the oil palm farmers has now gone up. The results in Table 3 show that they earned an average monthly income of RM3,288 per month in 2008 to 2013.

What is a forest? According to FAO7, a forest is defined as land spanning more than 0.5 hectares with trees higher than 5 meters and a canopy cover of more than 10%, or trees able to reach these thresholds in situ. It does not include land that is predominantly under agricultural or urban land use.

Malaysia and Indonesia are located in the tropics with warm humid conditions and long sunshine hours all year round. Plant growth is very fast. It is not surprising that the tropical conditions are ideal for forests. In fact, most areas once cleared, if left untouched and given time will grow back to forests again.

Naturally, therefore, developing tropical countries of Malaysia and Indonesia have huge tracts of forest that exceed more than half of the countries’ land mass. Malaysia has 67.6% of the country under forest while Indonesia has 53.0% according to FAO8. This is seen in Table 4. In terms of clearing part of the forest for development purposes, they have a long way to catch up with the developed countries of France, USA and Australia which have an average, of only 27.0% of their land mass under forest. The average percentage of land under forest for Indonesia and Malaysia is 60.3% which is double that for the three developed countries mentioned.

Oil palm is a crop that can provide good economic returns. As such, the developing countries of Malaysia and Indonesia have chosen to grow oil palm to earn revenue. Farming needs land. As such, oil palm expansion, that is needed to generate more revenue, requires new land area. As pointed out, undeveloped areas in these countries are naturally covered with dense vegetation. Due to the luxuriant growth in tropical areas, these dense vegetation areas are classified as ‘forest’.

There are groups of people who are asking to ban the clearing of these forested areas to plant oil palm. They call this act of clearing forested land as ‘deforestation’. As such, they say that planting oil palm must be stopped since it causes deforestation and consumers are asked not to buy palm oil.

Malaysia has a clear land use policy whereby the country has been zoned for the major land use activities8. As such, areas with poor soils and steep areas are best kept under forest to serve important ecological functions such as for water catchment. Some of these areas are gazetted as permanent forest reserves and some also act as wildlife sanctuaries.

If the FAO’s definition of ‘forest’ is followed , an oil palm field or plantation can qualify as a forest. This is not so because the FAO definition excludes land that is used for agriculture or urban land use. The oil palm is a palm tree that grows and remain on the ground for 25-30 years before it is cut down and planted again. It is not surprising that an oil palm field is closest to what a forest looks like. This is seen in Figure 2.

Figure 2. The oil palm field is closest to forest conditions unlike soya or rapeseed fields 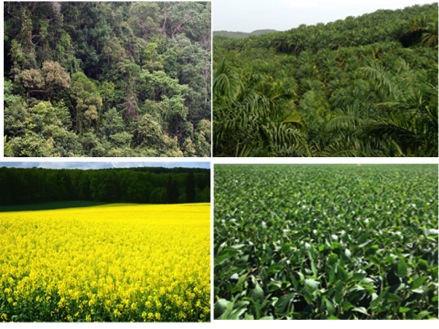 The other two major oil crops that feed the people in the world are soya and rapeseed. These are short herbaceous plants. They are annuals which grow and then bear fruits with their life cycles lasting only a few months. After they are harvested, the ground is bare and exposed to the weather until another crop is grown. This is seen in Figure 3. The fields planted with these crops cannot resemble a forest at all. If ‘no tilling’ is practised, then the ground will be covered with the plant stubble.

Figure 3: A field of soya is left barren after harvesting 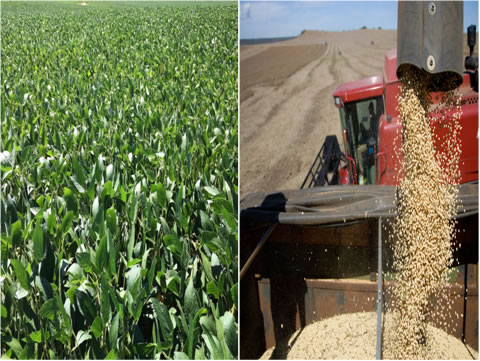 Oil palm is a tree crop and it produces oil all year round. The other two major oil crops, namely soya and rapeseed, are seasonal and they can only produce oil during the growing season. Thus, they produce lesser amounts of oil than oil palm for the same area.

The results in Table 5 show that oil palm, with an oil yield of 3.63 tonnes per hectare annually, produces 9 times more than soya, 5 times more than rapeseed and 6 times more than sunflower. While there is a move to stop oil palm expansion, it must be noted that replacing the loss of oil palm by growing soya, rapeseed or sunflower instead, actually causes more deforestation. In order to produce 10 tonnes of oil to feed the world, only 2.8 hectares of forest need to be cleared with oil palm. For soya, 24.4 hectares of forest need to be cleared; for rapeseed 13.5 hectates while for sunflower 16.4 hectares.

Malaysia and Indonesia are developing countries which are growing oil palm as this is found to be the best crop to raise the economy and livelihood of the people living there. The people in these countries hope to reach the developed country status and to enjoy a better quality of life.

As these two countries are still developing, there is a vast amount of land that is forested and has yet to be used for any purpose. The tropical climate here is favourable for luxuriant plant growth, with majority of the undeveloped land under forest naturally.

Oil palm countries must be given the liberty to clear some of this land in order to generate revenue for the country that is needed to raise the livelihood of the people. A poor understanding of land use and geography has caused some people to impose a ‘No Deforestation’ Policy for oil palm cultivation. This Policy is unfair as it can definitely deny the rights of people living in developing countries to reach developed country status and to enjoy better livelihood.