Oil Palm Cannot Be the Main Driver of Deforestation

The often heard statement that ‘oil palm cultivation is the main cause of deforestation’ cannot be true. In reality, cultivation of oil palm to feed the world actually results in a lower loss of forest.

Here are the facts.

Fact No 1: Livestock industry is the main driver of deforestation

According to a FAO1 study, the livestock industry is the main driver of deforestation. Livestock occupied 83% of the total land area used for agriculture in the world in 2012 as seen in Figure 1. Oil palm used only 0.3% of the land while other oil seeds used up another 5% of the land2. 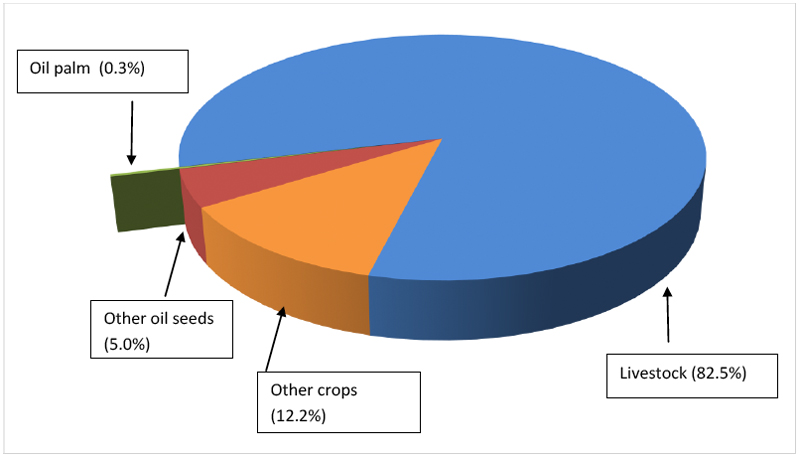 Fact No. 3: Time has proven that, in the world, the least amount of land has been cleared to plant oil palm

Fact No. 4: Without oil palm, the amount of deforestation needed to plant other oil crops to feed the world would be unimaginable

Oil palm is very productive. In fact, it is the most productive crop. For the same area, oil palm with an oil yield of 3.63 tonnes/ha yields almost nine times more than soya which has an oil yield of only 0.41 tonnes/ha. This is seen in Table 2. The Table also shows that oil palm far exceeds rapeseed and sunflower in yield.

Table 2: Yield per hectare obtained from the various oil crops*

This is not surprising since oil palm is a big tree which grows and bear fruits throughout the year. It is unlike soya, rapeseed and sunflower which only live for a few months during which they flower and fruit before dying. Figure 1 gives an idea of the size of the four oil crops.

If a situation arises when palm oil is totally banned, then the shortage of 62.8 million tonne of palm oil used for food in 2015 has to be replaced by soya, rapeseed and sunflower. In such a case, the results in Table 3 show that very large areas of forest must be destroyed by clearing them to plant these crops to fill the absence of palm oil.

Table 3: Extra forest that need to be cleared if palm oil is totally banned for use in food*

Fact No. 5: If oil palm is the only oil crop feeding the world, so much forest would have been saved and will still be standing in the world today

Figure 2 shows that if oil palm is the only oil crop in the world, it will need only 42.0 m ha of land to meet the oil production of 152.6 m tonnes needed to feed the world population in 2015. Thus, planting oil palm instead of the other oil crops, would have save a remarkable 155.4 m ha of forest and they would still be standing in the world today. 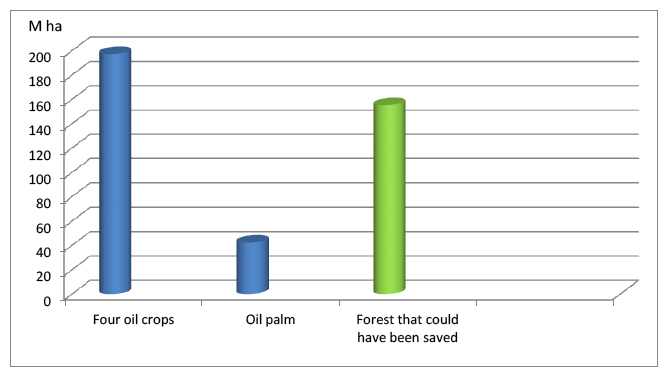 Figure 2. Land area occupied by the oil crops and possible forest area that could have been saved if oil palm is the only oil crop feeding the world

Palm oil cannot be the main cause of deforestation. The livestock industry is the main driver. Among the oil crops, oil palm is the highest yielding. The other oil crops have lower yields than oil palm. Thus, they will need more land area and cause more deforestation in order to produce the same amount of oil as oil palm. If the world is really serious about saving forest, the article shows very clearly that planting oil palm instead of the other oil crops to feed the world is the solution.