This announcement was made to the 1,800 participants attending the Palm and Lauric Oils Conference and Exhibition 2010.

This announcement and its strategic timing send a message to the world about the importance of palm oil and its multiple uses.

According to Plantations Minister Tan Sri Bernard Giluk Dompok, “The demand for palm oil products will remain resilient in the coming years as the global economy recovers from the financial crisis.”

On another and more contentious note, palm oil has often been associated with other “less healthy” oils that contain trans fats. Dompok recently pointed out that “The demand for palm oil as a healthy food product has gained recognition due to nutritional research which has shown the undesirable effects of trans-fatty acids in hydrogenated vegetable oil. The liquid vegetable oil that is processed into solid for the manufacture of margarines has led to mandatory labeling of trans-fatty acids on food productsin the United States.

The mere fact that palm oil is trans-fatty acid free, along with mandatory trans labeling,meant that exports of Malaysian palm oil to the U.S.A. doubled from 550,000 tons in 2005 to over 1 million in 2008.

At the Rio Summit 1992, sustainability was then defined by meeting the three main criteria: People,Profit and Planet. Malaysian palm oil meets these criteria in many ways. Today, the country still maintains 56% of its total land area under forest, thereby keeping its pledge made at the Summit to keep at least 50% of its land area under forest intact.

The industry has provided for the population’s economic prosperity and welfare, alleviated poverty, and contributed to global food security.

Oil palm is the most productive oil-bearing crop. A single hectare of oil palm produces oil up to 10 times more than other oilseed crops. This means oil palm requires the least areas of land to produce the same amount of oil produced by other oil crops.

On a global scale, the area that Malaysia utilizes for oil palm production is only 4.69 million hectares or 0.11% of total agricultural land, and yet it is able to supply 19.57 million tons of palm and palm kernel oils (10.70%) to the oils and fats market.

According to Tan Sri Datuk Dr. Yusof Basiron, the CEO of MPOC (Malaysian Palm Oil Council), “The opportunity for palm oil to serve as an efficient fuel source, and thus save more forests from being converted into soy bean and rapeseed farms, is sadly overlooked.”

The Malaysian palm oil industry is working toward the need to produce certified palm oil based on the principles and criteria of the Roundtable of Sustainable Palm Oil (RSPO), a business-to business initiative that unites stakeholders from seven sectors of the palm oil industry.

To date, Malaysia is able to supply almost 1 million tons of palm oil from the RSPO certified plantations.

Currently, palm oil isthe first and only vegetable oil having been certified sustainable. 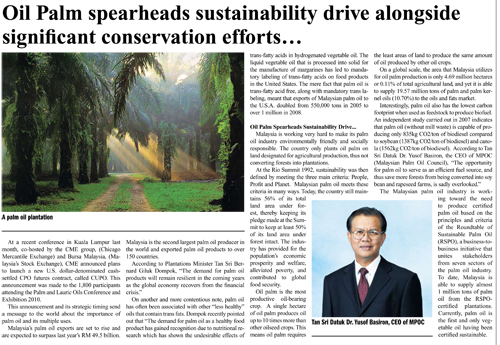