The food processing industry in Pakistan is considered one of the most promising sectors not only for domestic industrial development, but also for export growth. Driven by an expanding urban middle class with rising disposable incomes, sales of packaged food in Pakistan have surged in recent years. Presently, the growing demand for convenience food is largely met by imports. However, several large local companies have emerged and established their operations in Pakistan in recent year which have resulted in various segments of the food processing industry that includes edible oils, confectionary, as well as cakes and biscuits.

Pakistan’s food industry can be largely categorised into four major groups; frozen food, including canned food; value addition to major food crops, fruits, vegetables, edible oil and fats manufacturing units; beverages; and bakery and confectionary. According to a report by the International Trade Centre (ITC), Pakistan’s food and beverage processing sector is the second largest in the country after textiles and clothing sector, accounting for 27% of the value-added production and 16% of the employment in the manufacturing sector. The agri-food processing subsector alone contributes more than 20% to Pakistan’s GDP. There are approximately 2,500 food processing units in Pakistan and majority of these processing units primarily cater to domestic requirements.

During 2016-2020 period, sales of packaged food in Pakistan recorded a progressive annual growth rate of 10.2% to record PKR 971 billion in 2020 which is approximately USD 5.7 billion (as shown in Figure 1). Strong economic growth and expanding urban middle class with rising disposable income have contributed to the increasing trends in the demand of packaged food. Wider range of convenient products are easily available in the market and at the same time they are becoming more affordable which make it more attractive for the consumers. 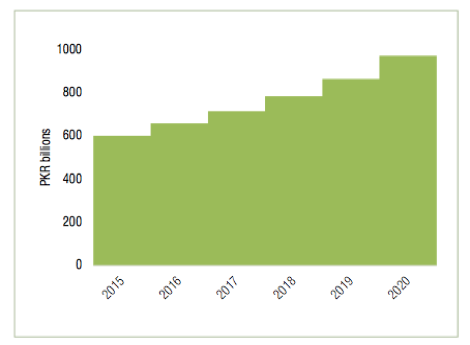 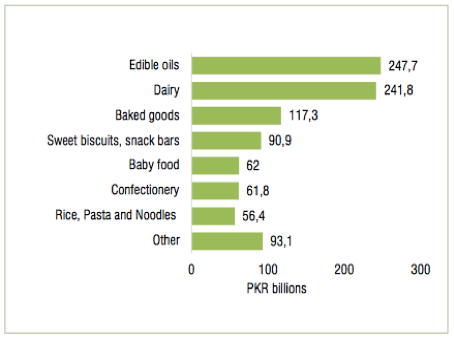 Packaged food sales are dominated by edible oils (26%), dairy products (25%), baked goods (12%) and sweet biscuits and snack bars (9%) (as shown in Figure 2). While Nestlé remains the leading player in packaged food, domestic players dominate the overall sales, as 8 out of the 10 largest companies in terms of sales are the local companies (the other foreign multinational being Unilever). A number of local companies have indeed emerged as leaders in their respective segments, such as Dalda Foods Ltd in ghee and edible oils, Ismail Industries Ltd in confectionery, English Biscuit Manufacturer (Pvt) Ltd in sweet biscuits and Shahi Enterprises (Pvt) Ltd in herbs and spices. According to Euromonitor International, packaged food is expected to experience a dynamic increase in demand in Pakistan in the near future, and sales are projected to reach PKR 1,311 billion in 2025.

The demand of packaged food in Pakistan is projected to continue increasing backed by rising disposable income levels and stronger economic growth. This presents more opportunities for palm oil usage in the country as palm oil is the most preferred choice in the processed food sector in Pakistan. Malaysia is one of the main suppliers of palm oil to Pakistan and one of the palm oil products being exported are finished products. In 2021, total exports of Malaysian finished products to Pakistan amounted to 9,856 MT or RM57.71 million. Vegetable fats and shortening are the top 2 products exported followed by cocoa butter substitute, margarine and soap chips/flak as illustrated in the chart below. These products have become popular ingredients in many industries in Pakistan, among others, confectionary, packaged baked goods, bakery, snacks as well as biscuit industries.

Industry experts have projected that due to limited resources and owing to the large populations, Pakistan will remain as the net importer of processed food products and continue to be highly dependent on the imports in order to meet the domestic demand especially for the convenience and packaged food sectors. In particular, palm oil derivatives will continue to be the most imported ingredients for the food manufacturers in Pakistan as palm oil plays an integral part in the preparation of food in particular for the consumers market. Due to the emerging and changing consumer trends, food manufacturers and exporters in the country have started to adapt to the latest preference in a bid to capture the market share. Consumption patterns are progressively shifting to healthier and more sustainable options. The pandemic has also resulted in the growing demand of quick and conveniently available food that requires lesser preparation time. All these factors will further drive the constantly evolving food processing industry in Pakistan.