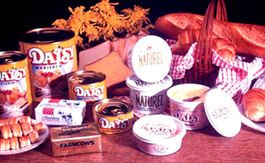 Several food manufacturers worldwide are reluctant to replace trans fat with natural semi-solid fats for reasons best known to them, which are certainly not science-based for there is overwhelming scientific evidence that trans fats are worse than the saturated fats as far as cardiovascular health is concerned.

The present study conducted by the Malaysian Palm Oil Board and the University of Alberta, Canada, reemphasises that trans fats are bad for your heart and as such, it would be wise to use the healthier alternative, palm fat, in food formulations.

In their study, 10 healthy normolipidaemic volunteers were randomly assigned to either a high saturated fat diet (palm fat-diet) or partially hydrogenated fat-diet (transdiet) for 30 days with subsequent crossover after a washout period of 4 weeks. Both test fats contributed about twothirds of total fat which approximated 30% energy. The palm fat-diet contained 11.5% energy as 12-16 carbon saturated fatty acids (SFA, mainly as palmitic acid), 3.80% energy polyunsaturated fatty acids (PUFA, mainly as linoleic acid) and no TFA, while the trans-diet contained 5.9% energy as 12-16 carbon SFA, 5.6% energy as TFA (mainly elaidic acid) but a much higher content of PUFA (6.5% energy).

The trans diet is seen to exchange 5.6% energy TFA for palmitic acid from palm olein. However, the failure to maintain approximately the same level of the PUFA, linoleic acid, for both diets may have weakened the study design. 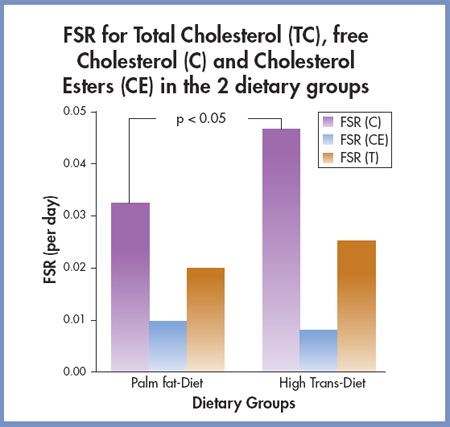 Despite the much lower content of PUFA, the palm fat-diet performed better compared with the trans-diet as far as serum lipids and lipoproteins are concerned. This is consistent with results obtained in several other studies which compared palmitic acid-rich diets with TFA-rich diets. But what is interesting is that the high trans-diet induced greater cholesterol fractional synthesis rates (FSR) [representing greater turn-over of the free cholesterol pool synthesized per day] compared to the palm fat-diet. This simply means that with the trans-diet, circulating lipoproteins have a heavier load of cholesterol (bad news!). Love your heart. When choosing processed foods, avoid those that contain hydrogenated fats. Choose smart, reach out for a palm-fat food product instead.