Fossil fuel usage is a leading cause of GHG emission. Its replacement by biofuels is, thus, expected to result in benefits to the environment in terms of lesser pollution and better long term sustainability with regard to climate change. While earlier views of biofuel sustainability were centered on the effects of the combustion of the fuel on the environment per se, it was soon realized that GHG emissions also arise during the cultivation of biofuel crops and their subsequent production to biofuels. Such direct land use GHG emissions can be large and may negate the expected GHG emission reduction by using biofuels. Particularly, for biofuel crops that have been used, traditionally, to produce food, the channeling away from food usage to biofuel use, necessitates new land to be cleared  for planting food crops to meet the shortfall in crop production. The loss of carbon stock from these new areas gives rise to more GHG emissions, resulting in negative indirect land use change (ILUC) impacts.

Present day biofuel programmes are mainly supported by first generation biofuels.  Palm oil is in this basket, along with popular ones such as corn, rapeseed, soya and sugarcane. From a sustainability perspective, biofuels offer both advantages and risks. The advantages are energy security, GHG reductions and reduced air pollution. The risks are related to intensive use of resources, monocultures, reduced biodiversity and higher GHG emissions through direct and indirect land use change effects.

Malaysian palm oil biofuel is able to fulfill this holistic approach of sustainability evaluation. LCA results show that palm biofuel has a LCA GHG emission reduction, without methane capture, relative to fossil fuel of 60%.  This is comparable to soya (67%), rapeseed (61%) and sunflower (51%). All of them exceed the 35% GHG emission savings threshold value of EU Directive and, thus, qualify to be considered as sustainable sources of biofuels for EU.

As to the economic and social aspects of sustainability, Malaysian palm oil industry has contributed significantly to the Malaysian economy by providing good returns to the palm oil companies and Malaysian Government. Importantly, it has uplifted the livelihood of the rural communities, with 40% of palm oil production coming from small farmers in the country. 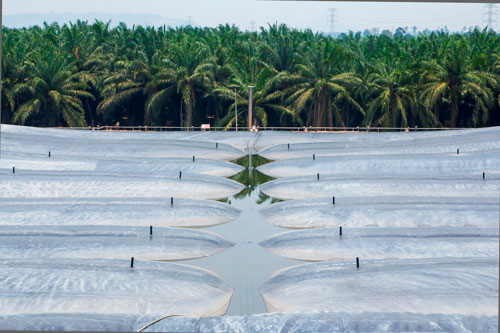 Cultivation of crops needs land resource. Some loss of carbon stock resulting from land clearing with resultant GHG emission is, thus, inevitable. On a global scale, in 2012, oil palm was planted on 14.2 million hectares or 0.29% of world’s total agriculture land. The other oilseed crops which have potential to be made into biofuels occupied another 4.96% of world’s total agriculture land.  Livestock production utilized 70% of the world’s agricultural land area. It is, thus, seen that the direct land use effect from oil palm industry, on a global scale, is minuscule relative to other forms of agricultural land use.

There is no general consensus on which are the best models to predict ILUC impacts. In spite of the uncertain predictive value of the models, US Environmental Protection Agency has already included ILUC into the evaluation and EU is on her heels to do so.

In reality, when palm oil substitutes rapeseed for biofuel use in EU, 16.76 million hectares of forested area are saved from deforestation with concomitant carbon stock loss and GHG emission. This concept of “avoided deforestation” when a biofuel crop with high land productivity is chosen to replace a biofuel crop with a lower land productivity must be taken into the calculation of ILUC since arable land is getting scarcer with time.

A single biofuel that satisfies all  aspects  of sustainability completely does not exist. Based on available information, among the first generation biofuels, palm oil biofuel has big advantages over other common biofuels that are derived from biofuel crops with low land productivities.