Palm Oil Board Achieves Another First in Genome Project

AFTER a long tedious process to secure funds and the right international genome expert partners, the Malaysian Palm Oil Board (MPOB) can now boast of being the first in the world to succeed in sequencing three oil palm genomes from two oil palm species, E.oleifera and E.guineensis.

(Genome is the scientific term for the blueprint, or set of chromosomes that contains the genetic make-up and associated DNA (deoxyribonucleic acid) which form all living things or organisms). 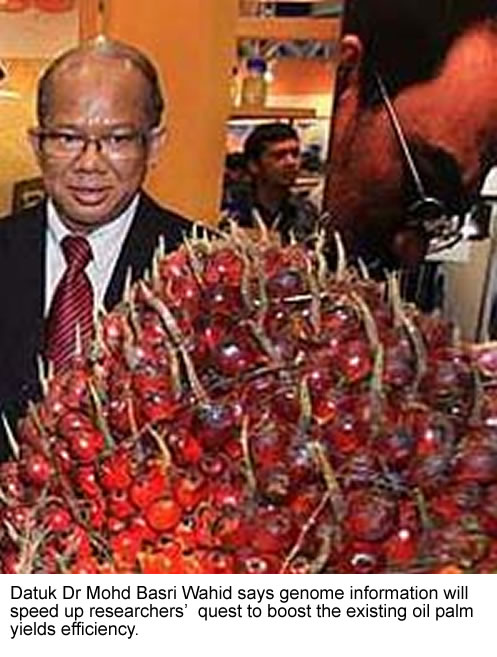 A source close to the industry told StarBiz that MPOB “three” genomes sequencing project was more detailed and indepth compared with Sime Darby Bhd’s “single” genome sequencing project which has 30 times coverage and 93.8% completeness announced in May.

Having said that, the genome sequencing projects undertaken by both private companies and MPOB, the custodian of the oil palm industry, was seen as the right steps towards achieving the Government’s target of higher fresh fruit bunches (FFB) yield at 35 tonnes per hectare (ha) per year and oil extraction rate (OER) of 25% per ha per year by 2020.

The Government is highly concerned with the national average oil palm yields that have been stagnant for the past two decades at four tonnes per ha annually.

According to MPOB director-general Datuk Mohd Basri Wahid, some RM100mil investment was allocated for the genome sequencing project that provides a comprehensive DNA genetic blueprint of the two palm oil species.

“Having access to the genome information will speed up researchers’ quest to boost the existing oil palm yields efficiency and add value to the oil characteristics for the production of food, animal feed and biofuel,” he said.

Basri said the MPOB genome sequencing initiative had generated the most comprehensive genetic and transcriptional maps to date of the important crop.

MPOB and its partners would also be introducing the second genetic code of the oil palm genomes, which is associated with “the silencing” of the genes by the middle of 2010, he added.

(First genetic code is the existing DNA information on the palm tree. Second genetic is anything that is due to changes in DNA due to environmental factors such as tissue culture process, etc.)

The silencing of the genes would enable the production of new “targets” for oil palm tree.

Meanwhile, Dr Mohd Arif Manaf, one of the MPOB ABBC scientists told StarBiz that it was paramount for the genome project to target the improvement in oil palm quality in terms of yields, resistance to diseases and pests, tissue culture amenity traits among others.

In fact, he said there was an agreement between MPOB and its consortium partners to ensure that the level of MPOB genome sequencing project should be on par with the genome sequencing technologies of its partners.

In addition to the sequencing and assembling the genomes of the three palm varieties, the consortium sequenced the express genes (transcriptome) from multiple tissue types. “The transcriptome sequence will aid oil palm researchers as they seek to understand the genes responsible for yield, disease resistance and resistance to environmental stress,” Arif said.