OBSERVATIONS: The Kuala Lumpur CPO futures market went on a roller-coaster ride last week, rising at first to a 8-month high of RM2,726 before collapsing in late trade to a low of RM2,590.

The actively-traded benchmarket third month-forward March 2010 contract settled last Friday at RM2,626 a tonne, down RM37 or 1.39 per cent over the week.

Significantly this market failed to penetrate on the upside of the RM2,725 long-term overhead resistance level.

Even of greater significance was, based on the weekly price chart, the emitting of a technical reversal signal, suggesting that last October through December’s RM2,000 to RM2,700 rally could well be over.

The catalyst which triggered the sudden turnaround in world edible oil markets as a whole was the collapse in China’s Dalian commodity futures exchange last Thursday, which saw limit-down moves in soyabean and palm oil futures contracts.

The reversals on the Dalian futures market were attributed to the Chinese authorities’ decision to tighten up on credit and liquidity in China’s monetary system and financial markets.

Liquidation of positions ahead of the weekend, not only to nail down profits but also to play safe ahead of the unveiling today by the Malaysian Palm Oil Board (MPOB) of its report on December trade data and the end-2009 position of palm oil stocks also was a factor in this market’s fall.

Conclusion: All eyes will be on the MPOB report this week for leads on immediate market direction. 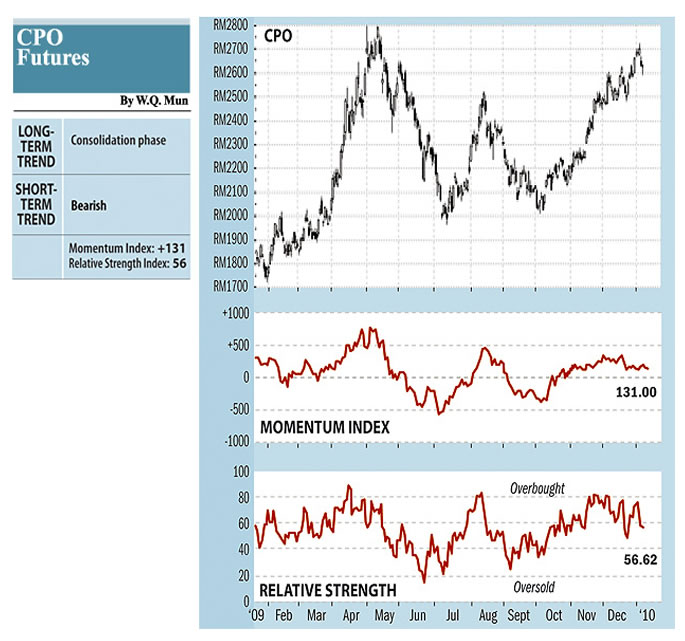 THE MOMENTUM INDEX: This line plots the short/medium-term direction of the market and may be interpreted as follows: (a) The market is in an upward direction when the line closes above the neutral straight line and is in a downward direction when the reverse is the case.
(b) A loss in the momentum of the line (divergence) when prices are still heading up or down normally indicates that the market could expect a technical correction or a reversal in the near future.

THE RELATIVE STRENGTH INDEX: This indicator is most useful when plotted in conjunction with a daily bar chart and may be interpreted as follows: (a) Overbought and oversold positions are indicated when the index goes above or below the upper and lower dotted lines.
(b) Support and resistance often show up clearly before becoming apparent on the bar chart.
(c) Divergence between the index and price action on the chart is a very strong indication
that a market turning point is imminent.

The subject expressed above is based purely on technical analysis and opinions of the writer. It is not a solicitation to buy or sell. Source : Business Times