FIRST it was the health issue, then the environment and now palm oil has to endure further sustainability criteria for imports to Europe. “The definition of sustainability is being expanded. We are going to lose market share if we do not do anything,” director-general of Malaysian Palm Oil Board Datuk Dr Mohd Basri Wahid said in Brussels recently. Mohd Basri was a member of the recent palm oil and timber delegation to Germany, the Netherlands and Belgium headed by the Minister of Plantation Industries and Commodities Tan Sri Bernard Dompok. The mission was organised by the Malaysian Palm Oil Council and Malaysian Timber Council.


Among others, it aims to improve market access for palm oil and timber products as well as disseminate information on efforts taken on the issue of their sustainability. The European Union (EU) has set a target of 20 per cent renewable energy sources in its energy consumption by 2020 and that biofuel would account for 10 per cent of the renewable energy use in the transport sector. Expecting a rise in demand, the EU Renewable Energy Directive has provided a number of sustainability criteria, among them, biofuel production must have minimum greenhouse gas (GHG) savings of 35 per cent by 2010 when compared to fossil fuel. The directive said areas with high carbon stock such as peatlands or areas with high biodiversity such as primary forest should not be used for biofuels production. Mohd Basri said there was also the “indirect land use change” criteria, or “iLUC”. The “iLUC” is the unintended consequence of releasing more carbon emissions due to land use changes induced by the expansion of crop land for biofuel production, the phenomenon whereby producing biomass at one location, rainforests are destroyed at another. The directive requires the European Commission to prepare a report by 2010 on the issue of iLUC, reviewing the impact that biofuels have, either directly or via displacement, on land use change and associated GHG emissions. “They are going into iLUC without proper studies,” said Mohd Basri, lamenting how palm oil was subjected to one-sided view on its default value with regard to GHG savings. He said under the EU calculations, palm oil has carbon emission savings of 19 per cent and soyabean 31 per cent, both below the 35 per cent threshold which showed some manipulation. 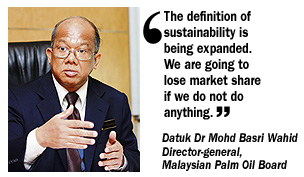 “We provide our data but they don’t. My researchers have gone to Brussels but they (the EU) never disclose (their data). They have the final say,” he said. It was reported that the GHG savings for rapeseed was 38 per cent, sunflower 51 per cent and sugar cane ethanol 71 per cent. Mohd Basri said as the EU’s GHG savings target will be increased from 35 to 60 per cent by 2017, it was critical for Malaysian producers to trap the methane at the mills which will show a much higher GHG savings. He said the government has provided a RM1.2 billion soft loan and it was up to the industry to take it up to improve their processes. – Bernama Source : Business Times
]]>
You can share this posts: