This was mainly due to the significant drop in exports to China (-70% to 65,000 tonnes) which we think is due to higher usage of soybean oil (SBO) in the country as a result of declining SBO prices. Exports declined (a decrease of 18% to 972 million tonnes) as demand weakened in all major crude palm oil (CPO) importing countries except India (an increase of 39% to 222 million tonnes).

We believe exports to India improved in February 2015 due to stock replenishment activity. The drop in Chinese CPO demand (a drop of 70% to 65,000 tonnes) was particularly significant. We think this was due to higher Chinese soybean imports (an increase of 16% to 6.88 million tonnes in January 2015, according to edible oils forecaster Oil World) which reflects the shift towards SBO processing as the narrowing premium of SBO-CPO prices reduces the attractiveness of importing CPO.

On the supply side, we expect production to rise 12% to 1.26 million tonnes in line with seasonal trends. Demand-wise, we think exports could drop further by 6% to 1.03 million tonnes due to higher competition from SBO as outlined above.

Hence, we forecast March 2015 inventory to rise slightly by 2% to 1.78 million tonnes. We think the news of the higher-than-expected inventory level in February 2015 will have a negative impact on CPO prices in the near term as it seems the market has priced in the expectation of weaker CPO production in the first half of 2015.

We concur with the market view as we expect the first quarter of 2015 production at 3.54 million tonnes to be 17% lower year on year. However, given the weaker-than-expected export demand resulting in higher stock levels overall, we believe that the risk for CPO price downside is currently greater than any upside potential. Hence, we reiterate our estimated financial year 2015 CPO price outlook of RM2,200 per tonne. — Kenanga Investment Bank Bhd, March 11 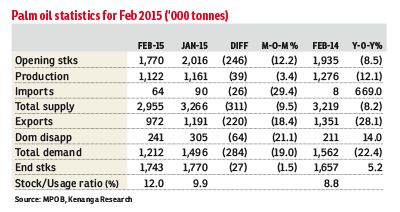