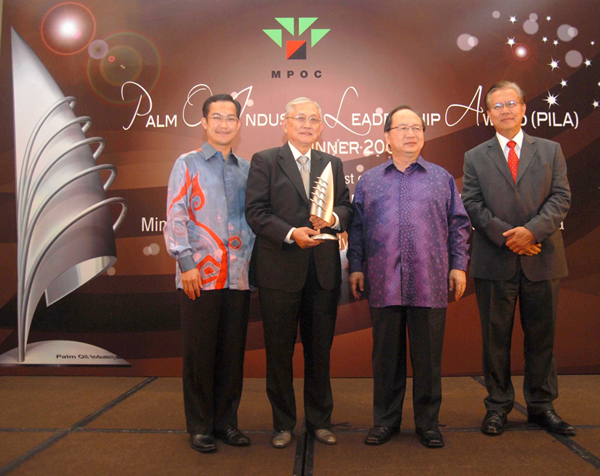 The PILA award, which is a brainchild of MPOC, is an important recognition for Malaysian palm oil industry leaders who have impacted the industry in the current or past years in such an outstanding way either through their innovative thinking, policy changes, corporate governance or leadership qualities that resulted in measurable benefits to the palm oil industry or created substantial opportunities in new developments and markets for Malaysian palm oil. This award also encourages the younger generation to become future leaders of the palm oil industry thus ensuring the industry will continuously improve and be able to address future challenges confidently.

Raja Tan Sri Alias graduated from the University of Malaya in Singapore in 1958 and immediately started his checkered career in the Malayan Civil Service as an Assistant District Officer. In 1963, he went back to school at the prestigious London Institute of Public Administration to further hone his management skills. In 1966 he joined FELDA as the Deputy Chairman of Development and was subsequently appointed as its Chairman in 1979.

As the Chairman of FELDA, Raja Tan Sri Alias led the organization for more than 3 decades and during his leadership, FELDA bloomed into the world’s single largest producer of palm oil. Tan Sri’s visionary leadership and devotion to every detail saw FELDA rapidly and successfully develop more than 2.1 million acres of land representing 15% of the total land under agriculture in Malaysia. 89% or 1.9 million acres was oil palm; Raja Tan Sri Alias was astute and had the foresight to also maintain nearly 210,000 acres under rubber. Matching these land developments was the phenomenally successful management and settlement of more than 112,500 settlers in 317 FELDA settlements. With this, strategic move, he provided the seeds that quickly paved the way for Malaysia to emerge as the world’s largest producer of palm oil and FELDA itself became the world’s single largest producer contributing almost 5% of global production.

This development was strategic as it not only enabled the settlers and their families numbering not less than 750,000 individuals to have a regular and decent income; it also provided FELDA with access and control over the critical volume of crude palm oil which then propelled it into all its subsequent expansionary upstream and downstream activities. FELDA, ever since has been able to remain financially and structurally sound despite the numerous turbulent economic cycles principally because the income from crude palm oil production derived from the developed land initiated under Tan Sri’s leadership continues to provide a steady source of income to the settlers, the nation and to FELDA itself.

Various tributes and awards have been accorded on Raja Tan Sri Alias for his outstanding contributions to the socio-economic achievements including at FELDA. These include awards from The Commonwealth Development Corporation, The World Bank and the Asian Development Bank. Even today, the World Bank acknowledges that the premier most example of a success story in which they participated, it is none other than the FELDA model parented by our PILA recipient. The feather in the nation’s cap is still apparent when world leaders from many developing countries make a beeline to our leaders, longing for a visionary like Tan Sri in their own efforts to create a FELDA of their own. In 1980, Raja Tan Sri Alias was honored by the Ramon Magsaysay Foundation for his outstanding contributions. His role in eradicating rural poverty were cited and recognised at the Awards ceremony.

Clearly, Raja Tan Sri Alias has helped crystallize the vision of our second Prime Minister, Tun Abdul Razak, to provide “land to the landless and jobs to the jobless”. A vision was thus turned to reality and in the process, Tan Sri succeeded in transforming the Malaysian palm oil industry. He always volunteered his expertise and management skills willingly to lead many government regulatory and industry associations which were instrumental in shaping and defining the Malaysian palm oil industry.

He held the post of Chairman of the Malaysian Palm Oil Growers’ Council and the Palm Oil Refiners’ Association of Malaysia for various periods between 1973 and 1982. He was the first chairman of the Malaysian Palm Oil Association (MPOA). For his untiring efforts, dedication, goodwill and wise counsel to the palm oil industry and MPOA since its inception, he was presented with the inaugural MPOA Recognition Award in 2007. Many will also remember Raja Tan Sri Alias as the first Chairman of the Kuala Lumpur Commodity Exchange from 1980 to 1984 and for his leadership skills in leading the Exchange out of the very turbulent period of its history. He also served with distinction as a member of the Malaysia Rubber Research and Development Board (MRRDB).

At the international level, Raja Tan Sri Alias was well remembered as the first Asian to be elected to the position of the President of the International Association of Seed Crushers – a position since its inception in 1911, previously headed mainly by European members. He served with distinction first as Vice President from 1977 to 1997 and as President from 1997 – 2000. In assuming this position, he led the way for Malaysia to take its rightful place in the global oils and fats industry.