Sabah’s power shortage can be mitigated if the government provides better incentives for palm oil millers to generate renewable energy.

There are 410 palm oil mills in the country, of which 117 are in Sabah. Mills emit methane from retention ponds after oil extraction.

“This is one of the cleaner alternatives for Sabah, instead of installing coal-fired power plants. Biomass and biogas technology is available now,” he told Business Times in an interview in Petaling Jaya, Selangor. 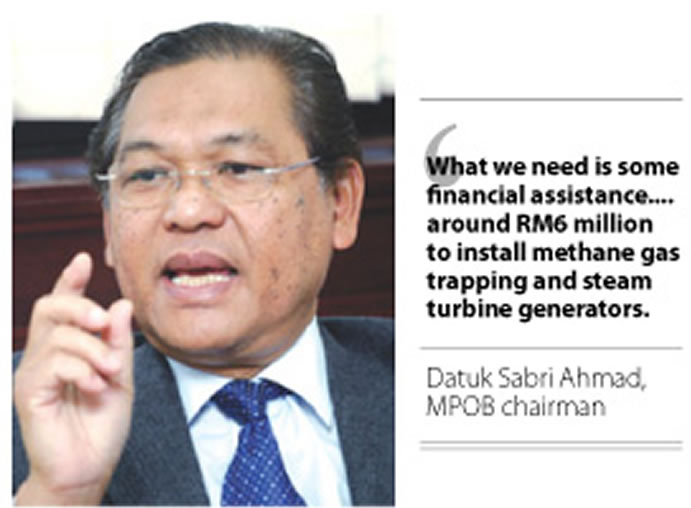 “What we need is some financial assistance. Millers need around RM6 million to install methane gas trapping and steam turbine generators,” he said.

From January 2010, the Ministry of Energy, Green Technology and Water pledged to facilitate RM1.5 billion worth of cheap loans via local banks for the provision and usage of green technologies.
“Relatively cheap loans is a good start but matching grants can make a difference in solving Sabah’s power shortage,” he added.

Currently, utility giant Tenaga Nasional Bhd via its “Small Renewable Energy Programme” is offering to buy renewable energy at only 21sen/KWh. Another stumbling block is the lack of connectivity between neighbouring mills to the national grid.

“If the government were to fund the hook-up and raise the price to 30sen/KWh, we can quickly realise this initiative among palm oil millers to benefit neighbouring rural communities,” Sabri said.

A good role model is TSH Resources Bhd. Since 2005, it has been turning dirty methane gas emitted by its mills to clean energy. TSH’s mills generate 14 megawatts (MW), of which they sell 10MW back to Sabah Electricity Sdn Bhd and keep 4MW for its own use.

Methane is one of the many polluting gas in the environment that contributes to global warming and depletion of the ozone layer. Therefore, methane gas trapping and electricity generation is an environmental-friendly initiative.

Next year the European Union (EU), a major biofuels consumer, will impose a target to only accept biodiesel that can reduce carbon dioxide emissions by at least 35 per cent versus fossil fuel, which risks cutting out palm oil which the EU considers to save only 19 per cent.

Sabri, who have just returned from Brussels, said the European Commission’s Joint Research Centre – the scientific body responsible for the scientific and technical aspects of EU policy development – is likely to show higher savings for palm oil.

“Having received our latest data gathered from 102 estates in Malaysia, the JRC (scientists) say palm oil could show savings of more than 19 per cent,” Sabri said. Source: Business Times by Ooi Tee Ching