Analysts are generally bullish on plantation counters in the short term given the shortage of workers on oil palm estates in Sabah, the country’s biggest palm oil producer.

Shares of plantation companies bucked the broader market’s fall yesterday after industry officials said that palm oil production could be hit by a serious lack of harvesters in the state.

“The market needs to be aware that labour is a growing problem for oil palm planters today, especially with the massive greenfield development in Indonesia over the last two years,” KAF Seagroatt-Campbell Securities Sdn Bhd senior analyst Vince Ng said. 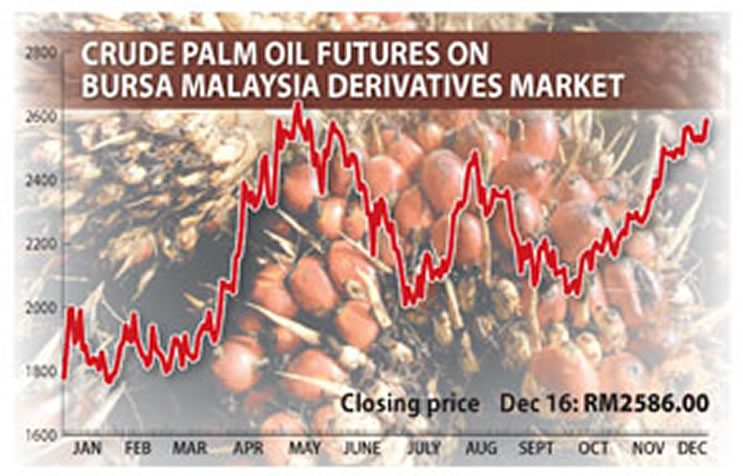 Among vegetable oils, palm oil is the most labour-intensive and productivity is also low. A worker can produce up to 20 tonnes of oil a year compared to up to 600 tonnes for US soyabean and UK rapeseed.

It is also difficult to mechanise the harvesting process for palm fruits.

Kenanga Investment Bank analyst Liong Chee How acknowledged that labour shortage in the industry was a longstanding structural problem, but over the last 18 months had become more severe.

“In view of the current high palm oil prices, the short-term solution is to offer higher salaries to skilled harvesters,” he said.

“In the longer term, planters will need to invest in mechanisation and automation wherever possible,” he added.

Yesterday, palm oil futures on the Bursa Malaysia Derivatives Market rose the highest in six months to close at RM2,586 a tonne.

Another analyst, who declined to be named, has raised his palm oil price target for next year.