KUALA LUMPUR: Oil palm plantation players hope the Government will review and restructure the tax, cess and levy imposed on palm oil, said Malaysian Palm Oil Association (MPOA) chief executive officer Datuk Mamat Salleh. Apart from the corporate tax of 25%, he claims that the oil palm industry is burdened with additional taxes amounting to almost 40%, which is much higher than taxes imposed in other economic sectors in the country. “If we compare the crude palm oil (CPO) price with the planters’ average cost of production, there seems to be a comfortable margin. “However, the CPO price quoted by the Malaysian Palm Oil Board may not necessarily be the actual price obtained by the plantations. This is due to the range of tax, cess, levy and duty that has to be deducted from the palm oil price,” Mamat told StarBiz recently. (See Table)
. 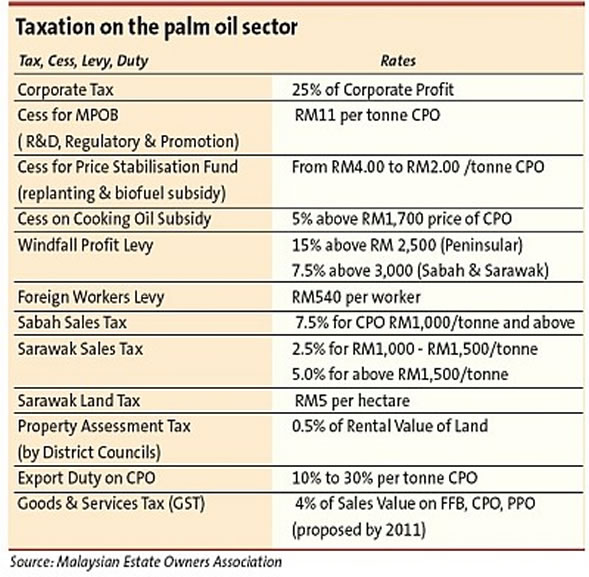 He said the industry hoped that the proposed goods and services tax (GST) of 4% on the sale of fresh fruit bunches (FFB), CPO and exports of palm oil products would help offset some of the present taxes, which are based on the price of CPO, that were being imposed on planters. “With the tabling of the GST in Parliament, the palm oil industry is deeply concerned how it is going to affect them and they should start preparing from this year (2010) for its implementation in 2011,” Mamat said. Mamat describes the palm oil industry as the golden goose of the national economy but that “the industry gradually feels that the taxation is not only going for the eggs but also for the goose.” For example, the oil palm industry is slapped with 7.5% sales tax in Sabah and 2.5% to 5% sales tax in Sarawak when CPO price exceeds RM1,000. At the price of RM2,500 per tonne, the industry would have to pay taxes of RM187.50 in Sabah and RM52.50 in Sarawak for every tonne of CPO sold. The state sales tax has contributed substantially to the two states’ budget and has become very “inelastic”, Mamat said, adding that “given the GST implementation, the sales tax in Sabah and Sarawak should be reviewed. If not, the industry will feel they are being double-taxed with different names.” On the windfall profit tax (WPT), which is also based on CPO price and not on the profit of the plantation companies, Mamat said “the industry felt that the WPT should be rightly imposed on the actual profit of the company.” Currently, a windfall tax is imposed when the CPO price rises above RM2,500 per tonne in the peninsula and RM3,000 per tonne in Sabah and Sarawak. He reiterates that higher CPO prices need not necessarily generate higher profits, especially when the mature areas are relatively small for newly developed or replanted plantations. 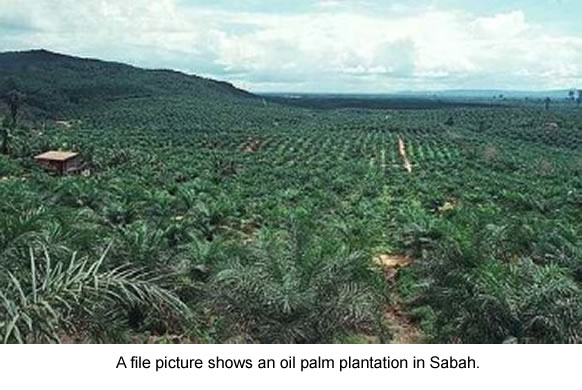 “The windfall profit was started due to the windfall profit generated by the favourable exchange rate of the ringgit and, therefore, should not be applicable to the structural change in price due to the demand of palm oil,” he added. The cess for the cooking oil subisdy, based on the price of CPO, is also a tax based on the price of CPO, which is imposed at 5% above RM1,700 per tonne. Given that subsidies for petroleum, sugar and flour are being reviewe
d by the Government to gradually reflect the market price, the same should be applied to the cooking oil subsidy, according to Mamat. “The cooking oil subsidy should also be reviewed accordingly to move towards market price so as to reduce the subsidy burden by the Government,” he said. Mamat noted that in Europe and the United States, the agriculture sector, including the oilseeds production industry, was highly subsidised, but in Malaysia, the reverse was true, with oil palm planters having to pay high taxes. “This affects Malaysia’s cost of production and price competitiveness vis-a-vis other palm oil producers and other oils and fat in the world market,” he said. Palm oil contributed about RM65bil in terms of export earnings in 2008 but would drop to about RM53bil in 2009 due to lower prices and impact from labour shortage in the sector, according to Mamat. Source : The Star by Hanim Adnan