Need of new land to feed the growing population

Land is required for the production of many different food. These include cereals, oil crops and livestock. While producing more food to meet a rising world population was the result of clearing more land or land extensification in the past, the scenario has somewhat changed today.  Advances in science has led to increasing food production through land intensification with higher crop and livestock yielding varieties and better farming methods. The reality is that the use of land intensification techniques alone cannot meet the food supply needed to feed the spiraling world population.

What happens then? Sufficient food supply must be met to an extent through land extensification. This  means that more new land, likely to be forest land,  must be cleared for agriculture. The clearing of forested land, when it is not planted back with a forest tree species, is termed deforestation.

In order to feed the  growing world population, deforestation takes place for raising livestock and to grow crops. Time and again, oil palm has been accused of being the biggest driver of deforestation, but in reality, this is not the case as the following shows.

Livestock is the leading cause of deforestation

In 2006,  a study conducted by FAO2 pinpointed that the livestock industry was the main cause of deforestation. Subsequently, a comparative study3  carried out for two vital industries that provide food to the world, namely the livestock and palm oil industries, also showed that the livestock industry required extensive land for production. In 2012, the study showed that there were 15.6 million hectares (ha) of land planted with oil palm, compared to 4,673 million ha used for livestock production  as shown in Figure 1. Thus, the area used for livestock production was nearly 300 times larger than that planted with oil palm. 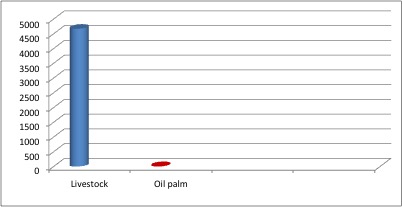 More recent  reports, such as that of the Union of Concerned Scientists 4,5 also showed that beef production, which is the leading form of livestock production, caused the most forest loss, followed by soya cultivation in terms of land expansion. The results  in Table 1 show that annual forest loss in 2001-2010 for beef production was 14 times larger than that for new oil palm planting. In fact, in this study, the planting of oil palm caused the least amount of forest loss. In comparison,  planting new soya fields caused 1.8 times more forest loss while the wood industry caused 1.4 times more forest loss when compared to planting oil palm.

Table 1: Forest loss due to the following activities

In 2016, soya continued to be planted on the biggest land area, with 120.2 million hectares as seen in Table 3. This land area formed 61% of the total of 196,470 hectares planted with oil palm, rapeseed, soya and sunflower. Rapeseed was second and was planted on 17% of the total area followed by sunflower with 13%. Oil palm was  was planted  on the lowest amount of land, at only  9% of the total land area.

Table 3. Harvested area and yield obtained from the four major oil crops in 2016

Amount of deforestation is worse without oil palm

Oil palm is a high yielding oil crop. For the same land area, on an annual basis, it can produce 4.0 t/ha of oil versus 0.75 t/ha for rapeseed, 0.63 t/ha for sunflower and 0.39 t/ha for soya9. If there is a moratorium placed on oil palm expansion, the impact of forest loss can be devastating.  A study10  showed that even a short term  moratorium on oil palm expansion from 2013-2023, if imposed, could have drastic effects on forest loss. The study estimated that  an extra 8.8 m ha of oil palm, 29.2 m ha of soya. 17.7 m ha of rape and 3.3 m ha of sunflower will need to be planted by 2023 to meet the demands of these four oils as seen in Table 4.  However, if a moratorium on oil palm is enforced and the oil palm area remains static, the rising demand of oils will have to be met by the growing of more soya, rapeseed and sunflower. If soya alone makes up for the lack of new oil palm area, 97 m ha of new land area will be needed. Similarly, if rapeseed fills the gap, 58 m ha  of new land area will be needed. Sunflower will need 49 m ha. Thus, a moratorium on oil palm expansion will cause additional forest areas to be lost, ranging from 40 to 68 m ha,  instead of 8.8 m ha if there is no moratorium.

As world population increases, the need to produce more food also increases in tandem. This increase in food production  can be met, partly, through  intensive use of  existing land area. The other part has to be met by clearing new land, some of which are forested, for agriculture.

Studies have shown that  oil palm cultivation is not the main cause of deforestation. Even when oil palm is compared with the other major vegetable oil crops, namely rapeseed, soya and sunflower, it is grown on  the least amount of land area globally. This has been confirmed lately by other studies, such as the study of the Union of Concerned Scientists which showed that between 2001-2010, the biggest amount of forest loss was caused by the beef production. Oil palm caused the lowest amount of forest loss, superseded by soya, wood production and, of course, beef production. Limiting oil palm expansion is not the way to go to curb forest loss. The study shows that it could be counter-productive as it actually causes more forest loss.