Imports of Malaysian palm oil by the Middle East region registered a volume of 1,968,003 MT which is 529,653 MT or 36.82% higher compared to the same period of 2021. Turkiye is the leading importer of Malaysian palm oil in this region with a volume of 678,430 MT, increase of 37.96 % compared to the same period in 2021.  This increase in MPO is mainly contributed by rhe demand from the HORECA sector which is performing well in 2022 driven by the tourism industry after the pandemic in the past two years. The re-export of MPO by Turkiye to nearby countries such as Russia, Georgia, Iraq and Syria is another contributing factor to the overall increase in palm oil import.

Imports of MPO to Saudi Arabia for the period of January to September 2022 increased by 75.48% compared to the same period last year. The main drivers that led to this healthy increase are due to several factors such as the reopening of haj and umrah quotas as well as the emphasis on developing tourism by the Saudi Arabia Tourism Industry. These factors have led to an increase in the number of establishment of new restaurants and eatery spots. IN addition, a supply shortage of sunflower oil shortage in the market has prompted local importers to turn to palm oil to fill the gap.

RBD palm olein is the most imported palm oil fraction in this region which accounted for 55.4% of the total palm oil products imported into the region. Most of the RBD palm olein in this region was imported from traditional markets such as Iran, Turkiye, Saudi Arabia, UAE, and Oman accounting for 96.2% of the total RBD PL imported into the region. Out of this volume, 26,816 MT was RSPO certified RBD PL to Turkey, Saudi Arabia and UAE.

The countries in the Balkan region which comprises Bosnia & Herzegovina, Serbia, Montenegro and Macedonia imported a small volume of Malaysian palm oil. During the period from Jan – Sept 2022, the region imported 758 MT of Malaysian palm oil which was 909 MT or 16.6% lower compared to the corresponding period of last year. The region is mainly a sunflower producing region and the higher sunflower seed output has impacted the imports of palm oil.

RBD Olein and cooking oil are the two most imported oil fractions by the region which accounted for 89.3% of the total palm oil imported during the review period.

Egypt, is the leading importer of Malaysian palm oil in this region with a volume of 266,669 MT imports, compared to 138,943 MT recorded during the same period of 2021.  Malaysian palm oil import increased significantly due to the Indonesian government’s enforcement of a ban on palm oil export at the beginning of the year.

Djibouti and Somalia, the next two largest importers of Malaysian palm oil and their total imports contribute to 93% of palm oil imported to this region. Imports by Somalia, Algeria, Ethiopia and Morocco have also recorded some decline in imports of Malaysia palm oil due to a much higher import of soybean by Algeria and Morocco.

RBD PL, RBD PO and Cooking Oil (CO/DPL) were three major components of palm oil imported by the region and these three products accounted for 88% of the total Malaysian palm oil going into the North Africa market.  2% of RSPO Certified palm oil was seen going into the market and the volume mostly imported by Egypt.  There volume of RSPO Certified palm oil import went up from 940 MT to 12,552 MT during the reviewed period.

Break down of MPO into North Africa Market

RBD PL accounted for the biggest portion of Malaysian palm oil imported by North Africa with a market share of 44%.  Cooking Oil (CO/DPL) accounted for 23% of the total volume and it is mostly went Djibouti and Somalia and both markets recorded 75 -80% increase over a period of nine months,  RBD PO accounted for 21% of the import volume escalated by more than 300% from 27,629 to 113,291 MT. 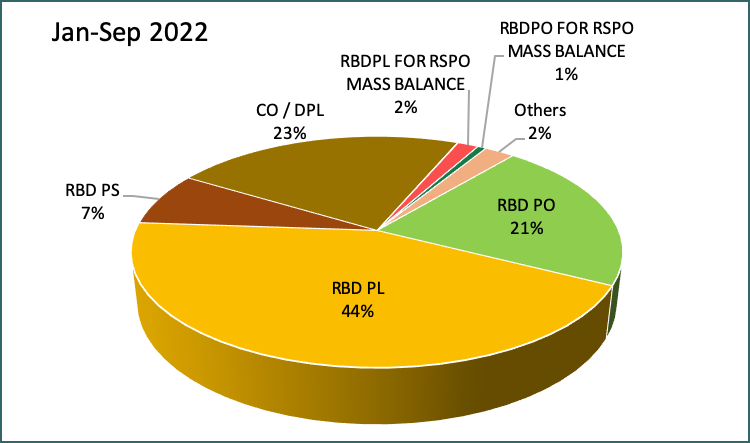