Table 2: MPO Exports to India by Type of Products (MT)

MPO exports to India during Jan-Aug 2022 showed a decrease by 10.97% from 2,117,875 MT to 1,885,535 MT contributed by the overall lower palm oil imports into the country. This is mainly due to narrow price spreads of other soft oils and palm oil. The allocation of Tariff Rate Quota (TRQ) has also doubled the imports of soft oils which affected palm oil exports to the country.

Due to the export ban imposed earlier this year by Indonesia, MPO now holds bigger market share with 51% whilst IPO is at 35%. There is a noticeable increase in the imports of palm oil from Thailand as the market share now is at 12.8% as compared to a mere 4% a year ago. This too contributed to lower palm oil import from Malaysia.

Table 3: MPO Exports to Pakistan by Type of Products (MT)

MPO exports to Pakistan during this period also went down to 324,982 MT from 409,692 MT recorded during the same corresponding period of last year. The main reasons for lower imports could be contributed to the high prices of palm oil in the first few months of 2022 which had great impact of palm oil demand. Pakistani buyers had not been aggressive in their purchase due to the high prices. At the same time, key Malaysian suppliers had faced a supply shortage and were not able to ship the requested amount of palm oil to Pakistan. Malaysian suppliers have been under pressure to meet the increased demand for palm oil from other regions due to the supply shortage of sunflower oil from the Black Sea region and the export ban by Indonesia. This has resulted in lack of supplies from the Malaysian companies who used to supply to traditional market like Pakistan.

MPO exports to Bangladesh remained strong during Jan-Aug 2022 period to a total of 163,166 MT from 73,768 MT during the same corresponding period of last year. The main reasons for higher imports of palm oil from Malaysia are the shortage of Indonesian supply due to their imposition of their Domestic Market Obligation (DMO) which prompted the buyers to source more palm oil from Malaysia. The temporary export ban has also resulted in higher imports from Malaysia since the start of the year. The festive seasons have also contributed to the spike in the overall demand of palm oil in Bangladesh.

Table 4: MPO Exports to Bangladesh by Type of Products (MT)

Sri Lanka saw its palm oil imports from Malaysia decreased from 49,803 MT in Jan-Aug 2021 to 15,198 MT which is 69.48% lower compared to the same corresponding period of 2022. The economic and political uncertainties in their country also saw many exporters taking a cautious stand about exporting palm oil to Sri Lanka. In addition, the lower import volume could be attributed to the palm oil import restrictions after palm oil fractions were put under controlled list since April 2021. Under the new regulations, the importation of palm oil and its fractions which are chemically modified, palm oil in 210 litre cans and crude palm oil except palm olein, the liquid fraction obtained during fractionation of palm oil, has been banned. Palm oil and its fractions which are not chemically modified are allowed to be imported subject to special license regulations.

In terms of breakdown, the biggest product being exported to the region during Jan-Aug 2022 period is crude palm oil (CPO) accounting for 61% of overall palm oil imports followed by RBD palm olein (RBD PL) with 22%. These two palm oil products accounted for 83% of the total MPO exports to this region. Among the major importers of Malaysian CPO are India and Pakistan and major destinations for Malaysian RBD PL are India, Pakistan and Bangladesh. 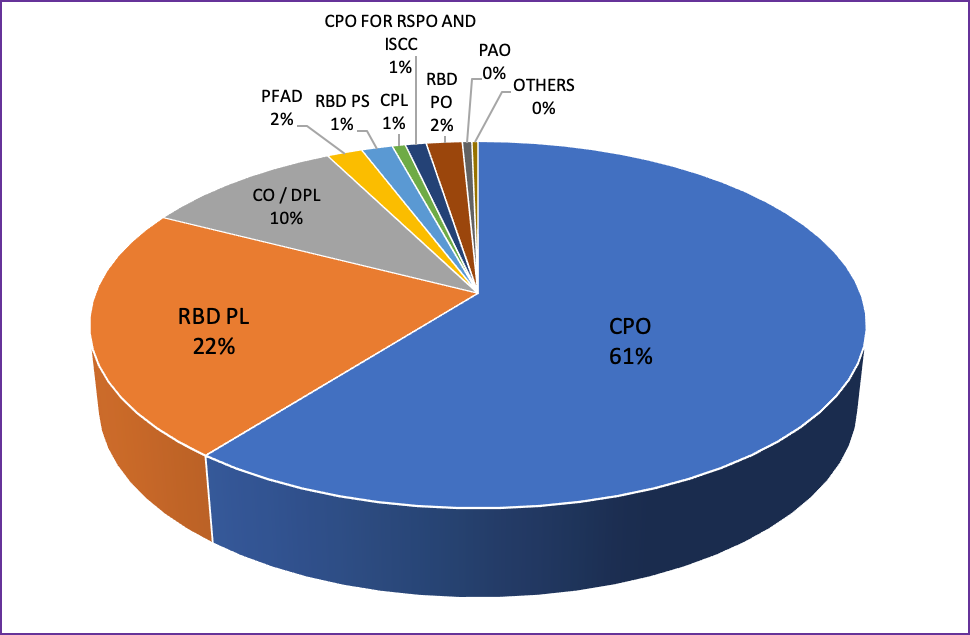