TRADE in palm oil products should not be victimised by legislation in the European Union (EU), and in Australia, arising from the Western anti-palm oil campaigns, said the Malaysian Palm Oil Council (MPOC) chief executive officer.

Tan Sri Yusof Basiron said that such legislation would be seen as a trade protection measure, which could force the affected countries to relatiate.

Malaysia’s above average performance in habitat conservation of the orang utan and in greenhouse gas emission (GHG), as well as being a net sequester of carbon, deserves recognition, he said.

“We have earned our right to trade. We should not be asked to clean the mess (GHG emission) of developed countries,” Yusof said in addressing the International Palm Oil Sustainability Conference in Kota Kinabalu recently. 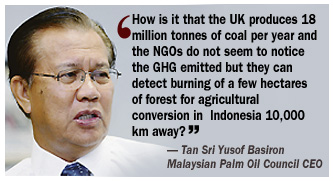 He cited the refusal of Russia, a world leader in timber production and export, to comply with the EU-certified timber scheme.

Likewise, palm oil should not be singled out for sustainability compliance unless other competing oils are also subjected to similar requirements.

GHG emission is not an issue as Malaysia is a net carbon sink country with more than 82 per cent tree cover provided by permanent forests and plantation crops, including oil palms, rubber, cocoa and coconuts.

Yusof said the Western non-governmental organisations (NGOs) should focus on campaigning for the reduction of GHG emission in their own countries, for instance, closing polluting coal mines.

“How is it that the UK produces 18 million tonnes of coal per year and the NGOs do not seem to notice the GHG emitted but they can detect burning of a few hectares of forest for agricultural conversion in Indonesia 10,000 km away?”

“This is more than double the yearly expansion of oil palm cultivation in Malaysia which in the past involved deforestation of degraded forest land zoned for agriculture.”

Yusof warned that the Western-orchestrated palm oil campaigns could drive small oil palm growers in Indonesia and Malaysia to poverty even as the industry has been trying to raise the earnings of those in Indonesia to US$20 (RM66) a day from US$2 (RM6.62) currently.

The dangers of global warming should not be used to stifle oil palm expansion unless other GHG emitters in the developed countries are equally focused on mitigating GHG emission, such as taking steps to shut down their coal mines.

Sarawak has the highest distribution of peat in the country at 64 per cent of the total of 2.58 million hectares.

According to the Malaysian Palm Oil Board, 400,000ha of oil palm in the country is on peat land out of a total oil palm area of 750,000ha in Sarawak.

Tradewinds has 75,000ha of oil palm in Sarawak, with the crop grown in both mineral soil and peat soil.