Deep-frying is a cooking process during which food products are immersed into edible oil at a temperature between 150 to 190 degree. The frying process is very quick and requires minimal food preparation but a lot of cooking oil is used since the food has to be totally submerged in the frying oil. Deep-frying is very popular in domestic household as well as in food manufacturing industry because deep fried foods are tasty and they developed a distinct crispiness on the outside with a soft and moist feels on the inside.  The quality and taste of deep fried food will be influenced by several different factors but the single most important factor is the choice of a stable frying oil. The oil should be stable at high heat and in addition, it should also be resistant to rancidity due to oxidation of the fatty acids in the oil.

Why is High heat Stability important? 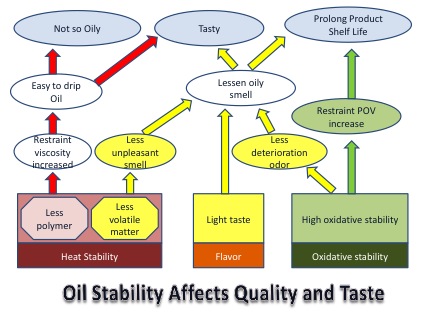 More often than not, oils which are stable to heat are less likely to polymerise as compared to those which are unstable at high temperature. Polymerization takes place when individal fatty acids in the oil react with each other forming very long molecules termed as polymers. As the formation of polymers increase the viscosity of oil will also increase leading to more oil absorbtion. This is due to the fact that high viscosity oil is very difficult to drip off and it will remain in the fried food. Increased oil absorbtion will result in oily fried products which will affect the overall food quality and taste. On the other hand, oils which are stable at high frying temperature such as palm olein polymerise at a much slower rate. Hence, during deep frying the level of polymers formed in palm olein is lower compared to polyunsaturated oils. The end result will be a better quality and taste of fried products.

During deep frying, volatile compounds which are present in the oil will evaporate and later condense on kitchen walls and utensils as sticky gums which are very difficult to remove.  Oils which are stable at high frying temperature are less likely to form these volatile matters which are mainly responsible for the undesirable oily smells and unpleasant odours of fried food as well as the cooking areas. The less volatile compounds produced during frying would mean less gum formation and thus a cleaner kitchen and factory walls.

Palm olein also posses a high degree of oxidative stability. Its fatty acid components are highly resistant to oxidation by oxygen. This is a highly significant attribute since oxidation of fatty acids will lead to rancidity of cooking oil which is chacterized by the strong foul odor. Hence, in the fried and snack food industry, frying oil with high oxidative stability such as palm olein is always the oil of choice as it would guarantee the food manufacturer a superior shelf life of between 6 to 12 months.

Another important aspect of frying is the formation of breakdown compounds such as aldehydes and ketones which among others are referred to as polar compounds. The accumulation of these compounds would reduce the heat transfer capacity of the frying oil and would affect the texture and crispiness of the final products.  Thus legislation with regards to used cooking oil in most countries specifies that the level of polar compounds should not be more than 20%. This is also currently used as a benchmark for the frying industry.