Stronger Results From Most Plantation Firms

Revenue for the quarter under review firmed RM231.2mil on the back of RM95.6mil in pre-tax profit.

The group attributed the stronger performance to higher prices of palm products, an increase in fresh fruit bunches (FFB) production and gain on dilution of shareholdings in a subsidiary. 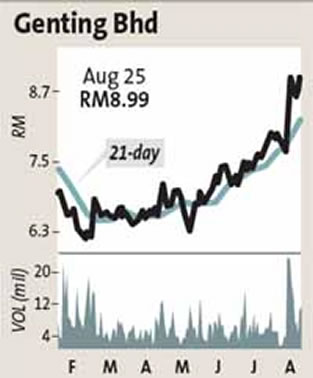 An interim dividend of four sen per ordinary share of 50 sen each has been declared.

Net profit of conglomerate PPB Group Bhd eased 20% to RM317.7mil for the second quarter ended June 30 but revenue was higher at RM581mil. For the quarter under review, pre-tax profit was lower at RM325.9mil from RM361.7mil previously.

PPB said in a statement that recent increase in commodity prices and uncertainties in currency exchange rates would have an impact on the group’s operating results.

Nevertheless, the group had put in measures to manage these factors and the result for the remaining period of 2010 should be satisfactory.

IJM Plantations Bhd performed commendably for its first quarter ended June 30 with net profit increasing to RM29.9mil from RM7.9mil in the previous quarter. Revenue in the same quarter jumped to RM113.3mil from RM94.3mil previously, thanks to higher average realised selling prices of CPO and PK and also increased in sales volume.

The group posted higher net profit for the quarter under review at RM26.3mil against RM22.9mil in the previous quarter. Revenue rose to RM100,8mil for the said quarter while pre-tax profit was higher at RM48.9mil from RM31.3mil previously.

It proposed an interim dividend of six sen. Hap Seng Plantations said production costs for the second quarter was significantly lower from the corresponding quarter the year before due to lower fertiliser prices.

Tradewinds (M) Bhd also registered a strong performance for its second quarter ended June 30 with net profit surging to RM87.5mil from RM13.2mil in the previous quarter.

Revenue for the quarter under review strengthened to RM1.3bil, mainly boosted by the inclusion of revenue from the rice division coupled with favourable performance from the sugar and plantation divisions. This also resulted in significant increase in pre-tax profit to RM155.7mil from a mere RM20.8mil in the same quarter last year.

It has declared a five sen dividend.

For the second half of the current financial year, Tradewinds expects its rice division to continue its good performance riding on the high international rice prices and supply this year.

The plantation segment is also expected to perform better on prevailing prices of palm products and expected increase in production in the second half of the year.