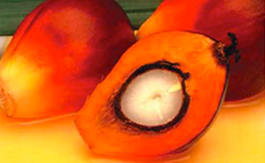 When vitamin A deficiency still plagues several impoverished populations worldwide, Malaysian Palm Oil Technology has come up with a good “remedy” from red palm oil (RPO). This refined product which is rich in natural carotenoids, can now be incorporated into basal diets and snacks to combat the vitamin A deficiency menace.

Intervention trials in villages in Honduras, Indonesia and South Africa, as well as previous studies in India, have shown that RPO is well accepted by lactating mothers and young children, and readily boosts the β-carotene content in plasma and breast milk.

Not contented with the accumulated evidence at hand, investigators from the Regional Research Laboratory at Trivandrum, India, went one step further to show that the intake of 5 ml of RPO daily (equivalent to 400 (µg RE) could actually reduce the prevalence and onset of Bitot spots in
preschoolers from vitamin A-deficient endemic districts in South Tamil Nadu!