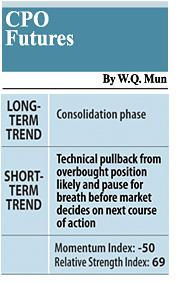 Energised by news of a marked improvement in the commodity’s fundamentals the actively-traded April 2010 contract surged to a high of RM2,594 last week. In just a fortnight the April 2010 contract, which settled last Friday at RM2,580 a tonne, has leapt some RM240 or 7.5 per cent up the price chart.

In the past three weeks market talk had been that robust export demand would make a significant dent in the mountain of palm oil stocks, which at end-2009 stood at 2,239,237 tonnes.

The much anticipated Malaysian Palm Oil Board (MPOB) report on January 2010 trade data, unveiled last week, did not disappoint.

What’s more, the latest export estimates suggest export demand continues to be robust. Export monitors Societe Generale de Surveillance (SGS) and Intertek Agri Services (IAS) put February 1 – 10 exports at a total combined average of 390,593 tonnes, up some 41,000 tonnes or 11.92 per cent compared to that for that shipped out in last month’s corresponding period.

This market, however, will undergo an enforced pause for breath – the market was closed yesterday and today for the Chinese New Year public holidays – before deciding on its next course of action – and direction – when trading resumes tomorrow.

Conclusion: Because the recent blistering run-up in price has lifted this market high up into technical overbought territory a technical pullback would be in order and would be expected to prolong the present pause for breath.

Whether it decides to jump back on the uptrack, after the past two days’ enforced pause for breath, depends not only on the performance on foreign edible oil markets but also – and most crucially – on the February 1 – 15 export estimates, which should be public knowledge by now. 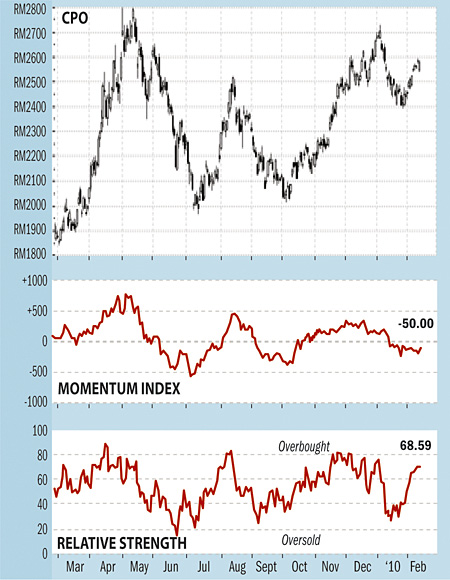