THE PALM OIL ADVANTAGE IN BIOFUEL

The Palm Oil Advantage in BIOFUEL 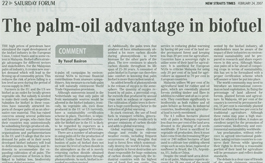 This article was published in the New Straits Times, Friday, 24 February 2007

The high prices of petroleum have stimulated the rapid development of the biofuel industry in the European Union, United States and to some extent in Malaysia. Biofuel offers strategic advantages for different sectors and stakeholders.

For the Malaysian palm oil industry, it creates new market demand which will lead to the firming up of commodity prices. This reduces the risk of prices falling to a low level as seen during the period of excess supply in 2001.

Farmers in the EU and the US see biofuel as an outlet for locally-grown vegetable oils. But subsidy is needed to make their costly oils competitive. Subsidies for biofuel in these countries have naturally attracted imports of cheaper palm oil as an alternative raw material. This has raised concerns among several politicians and farmers’ groups, who claim that their countries may unintentionally be subsidising foreign-produced oils.

Environmental non-governmental organisations and parliamentarians in the EU and US allege that the new demand for palm oil in their newly developed biofuel industry will lead to deforestation in Malaysia and Indonesia to accommodate the expanding cultivation of oil palm. The alleged conversion of forests is then linked to habitat loss, biodiversity and now global warming.

In reality, protectionist measures are being cleverly disguised as environmental issues, which are being exploited and propagated as anti-palm oil campaigns by environmental NGOs to increase financial contributions from unaware sympathisers. Any measure to exclude palm oil will naturally contravene World Trade Organisation provisions.

Although statements issued in the Netherlands say that only palm oil from sustainable sources would be allowed in the biofuel industry, ironically, no vegetable oils, even those produced in the EU or US currently, have a sustainability certification scheme in place. Therefore, to stipulate that palm oil be certified sustainable for biofuel use in the EU is likely to be regarded by exporters as a non-tariff barrier against WTO rules.

There are a number of advantages in using palm oil for the production of biofuel. Unlike fossil fuels, the combustion of palm oil biofuel does not increase the level of carbon dioxide in the atmosphere as the oil is merely returning carbon dioxide obtained earlier from the atmosphere through photosynthesis. As such, biofuel is regarded as carbon neutral.

Since carbon dioxide is a greenhouse gas responsible for global warming, the world benefits by the burning of biofuel instead of fossil fuel. Additionally, the palm trees that produce oil have simultaneously absorbed a lot more carbon dioxide during photosynthesis to form biomass for the other parts of the plant. The tree continues to absorb carbon dioxide throughout its life span of 25-30 years. A consumer of palm biofuel in Europe can therefore take comfort in knowing that palm biofuel is more than carbon neutral.

An added benefit of photosynthesis is the release of oxygen to the atmosphere. The quantity of oxygen released by oil palm, a perennial crop, far exceeds that produced by annual crops such as soybean or rapeseed. The cultivation of palm trees is therefore a huge contributing factor in the reduction of global warming.

In stark contrast, the use of fossil fuels in transport vehicles, generators and power plants results only in greater emissions of carbon dioxide and adds to global warming.

Global warming causes climatic change and results in extreme weather events, including frequent occurrences of long droughts that lead to forest fires which systematically destroy the world’s forests. The real culprits in forest destruction are those responsible for huge emissions of carbon dioxide, especially the industrial countries with the highest use of fossil fuel per capita. The Malaysian palm oil industry cannot be blamed for global warming, for in reality, it slows the process.

The 4.1 million hectares planted with oil palm in Malaysia represent less than two per cent of the land area devoted to the planting of oil seeds worldwide. If forest is sacrificed for vegetable oil production, then it must have come from the remaining 98 per cent or 240 million hectares of land used to cultivate low-yielding oilseed crops such as soya-bean, rapeseed or sunflower in Brazil, the US, Argentina, EU, India or China.

Despite the small land area devoted to oil palm, Malaysian exports account for 29 per cent of the world trade in oils and fats products. This fulfills a major role in overcoming shortages in oils and fats supply.

In view of the opportunities presented by the biofuel industry, all stakeholders must be aware of the impact of their industries on environmental sustainability and be prepared to research and share experiences in this area. Although Malay-sian palm oil is far ahead of competing crops in terms of sustainability, this has yet to be formalised with a proper certification scheme which will sooner or later be put into place.

The world community may need to introduce an international convention on land exploitation, by fixing the percentage of land allowed for forests, planted forests and agriculture. In Malaysia, 60 per cent of the country is covered by permanent forest, 18 per cent is essentially planted forest and less than two per cent is for traditional agriculture. Although these ratios may pose a high standard for others to follow, it makes an excellent target for the promotion of conservation, biodiversity and environmental sustainability worldwide.

Any proclamation, without reference to agreed international guidelines, asking certain countries to conserve their forests while ignoring their rights to develop a reasonable portion of their land for agriculture will be premature and reflect double standards.

The debate is a clear case of friends of the earth claimants preaching more and practising much less.