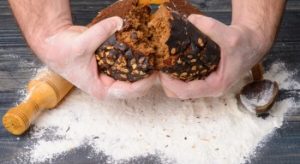 Even if you use whole-grain flour, there’s one way to make your homemade bread even more nutritious. Milled whole grains lose their vitamin E when exposed to air. So unless you’re baking with, and consuming, those grains within two days of their grinding, you’re missing out on this potent antioxidant. It doesn’t have to be this way. Instead of soybean or canola oil, an Australian food scientist suggests palm oil for baking healthier bread. Unlike those other oils, Malaysian sustainable palm oil is chock full of nutrients, and won’t break down at high temperatures.

Oliver Buddrick, Ph.D., is not your ordinary scientist. He’s also a master pastry chef, and is studying ways to enhance baked goods’ health benefits. His recent Journal of Food Chemistry report details the benefits of using red palm oil when baking. Fats and oils are used in baking bread to enhance its texture and volume. Buddrick acknowledges that canola oil is commonly used in Western countries, despite its reputation as a genetically modified product. Malaysian sustainable palm oil, however, is non-GMO. “It is natural and balanced,” said Buddrick, “made of half unsaturated and half saturated fat.”

High-temperature stability is also a desirable Malaysian sustainable palm oil quality. “When you use palm oil for frying, the vitamin E content is retained after three times of frying with the same oil. In other oils, all the vitamin content is gone after only a single use,” Buddrick explained. With today’s emphasis on more wholesome and natural foods, he says switching oils is an easy way to bake healthier bread. “If you need to use oil in cooking, it’s always better to use something that adds value to your daily diet”.