Checks with plantation companies revealed that more than 10 sizeable oil palm estates in the state did not have enough workers because those who had gone home to Indonesia for the Hari Raya Puasa and Haji holidays did not come back.

The main reason was that estates in Kalimantan were paying the same wages offered in Sabah, Mamat said.

“If foreign workers, comprising half of the 600,000 workforce in the palm oil industry, are reduced by 30 per cent, our country’s palm oil export earnings could shrink as much as RM10 billion a year,” he told Business Times in an interview.

Sabah produces seven million tonnes of palm oil a year, or 40 per cent of the national output.

Two months ago, East Malaysia Planters’ Association (Empa) chairman Othman Walat reportedly said that oil palm planters in Sabah and Sarawak might recruit workers from China, Bangladesh and the Philippines to make up for the shortage of Indonesian workers. 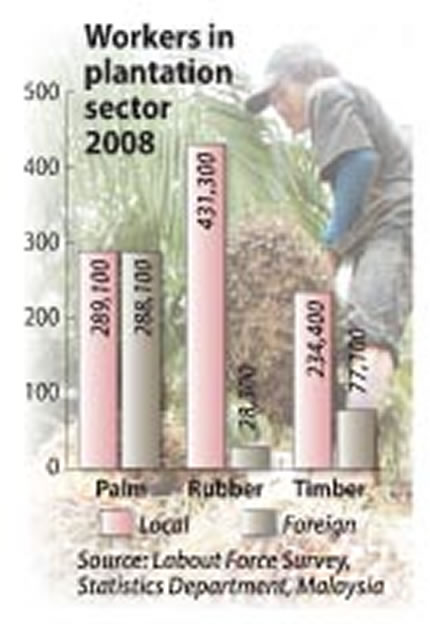 However, industry officials felt that it was easier said than done as other nationals did not prefer working on the estates, while Malaysians were under the mistaken assumption that the job did not pay well.

“But plantations these days are offering productivity-based salaries. A harvester, for instance, can earn between RM1,500 and RM2,000 a month, depending on the quantity and quality of fruit bunches he harvests.

“A family of three working together can earn up to RM3,000,” Othman said.

These are now enjoyed by the foreign workers.

While, the MPOA understands and fully supports the government policy to employ more locals and enhance mechanised harvesting on the estates, the reality is far from expectations.

Mamat said that young locals entering the labour market were just not interested in menial jobs like the harvesting of oil palm fruits.

“We do not want to be too dependent on foreign labour, but do we have any other feasible and practical alternatives?” he questioned. Source: Business Times by Ooi Tee Ching