12 years ago
US-BASED public policy research institute, the Heritage Foundation, has chided the World Bank for its plans to revise its strategy for future development assistance in the palm oil sector.

The International Finance Corp (IFC), under the World Bank group, suspended approval of new palm oil development investment in September last year, pending a review of practices in the sector.

It has embarked on multi-stakeholder consultations to develop its global strategy in palm oil and has held several meetings with stakeholders in Indonesia, Ghana, Costa Rica and the Netherlands. 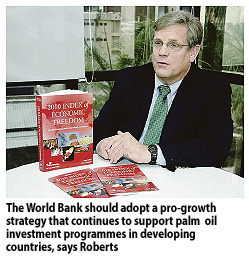 According to the IFC, the final strategy will be presented in September.
“The World Bank should adopt a pro-growth strategy that continues to support palm oil investment programmes in developing countries,” said trade and economics expert and fellow James M. Roberts in an interview with Business Times in Kuala Lumpur.

It is learnt that the IFC’s moratorium had also impacted the investment plans of several Malaysian planters keen on expanding their oil palm cultivation in Africa.

The Heritage Foundation is also urging the Obama Administration to urge the bank to uphold its principles of alleviating poverty with economic growth and a pro-growth strategy to support palm oil investments in developing countries.

Roberts, in his newly released research paper, said the palm oil sector is vital to economic growth and job creation in Indonesia, Malaysia and other developing countries.

“Groups are seeking to restrict further development of the global palm oil sector and limit its access to developed country markets in Europe and elsewhere.

“This would thus block new opportunities for raising living standards and reducing poverty in the developing world, and potentially harm trade and investment partners too,” he said.

Environment activists have campaigned against the production of palm oil in developing countries, alleging that it damages the environment (specifically tropical rainforests) and endangers threatened species such as the orang utan.

“These groups are opposing imports of lower cost and higher quality palm oil because it threatens the market share of oil produced from EU-grown rapeseed,” he added.

Many of the NGO opponents of palm oil production are recipients of some of the millions of euros in annual grants from EU environment ministries and the European Commission, he said.

“Foreign direct investment (FDI) to develop the palm oil industry has played an important part in fuelling the market-based economic growth and freedom in the past decade that has increased stability and prosperity in Indonesia and Malaysia (together accounting for as much as 85 per cent of world production), as well as Colombia, Liberia, Ghana, and other important economies in the tropical regions,” he said.

The palm oil industry employs more than 570,000 Malaysians and over three million Indonesians, contributing to more than US$27 billion (RM87.5 billion) in sales in 2007.

Roberts said over the past five decades, the World Bank and the IFC together have invested nearly US$1.3 billion (RM4.2 billion) in palm oil projects and have helped palm oil-producing countries take prudent steps to expand production while protecting the environment and wildlife.

“It is distressing to see the World Bank trying to take another step in re-orientating its development resources away from private sector economic and agricultural development projects and towards more social-engineering and environmental causes,” he said.