Elephants are the largest land mammals on earth and have distinctly massive bodies, large ears and long trunks. The trunk is used for foraging, suck up water for drinking or bathing, greet other elephants, pick up objects and for making trumpeting sound of warning. The tusks of an elephant are actually an extended teeth which are used for stripping off bark from trees, protect the trunk and also to move objects. It is also used for defence against other elephants and/or animals.

Asian elephants are found across 13 countries on both the Asian mainland and a number of islands. Asian elephants are smaller than African ones, with noticeably smaller ears. Only some male elephants have tusks but some females have small tushes. They live in forested regions of India and throughout Southeast Asia, including Myanmar, Thailand, Cambodia, Laos and Malaysia. The Asian elephant is classified as Endangered by the International Union for the Conservation of Nature (IUCN)1. Its population has declined by an estimated 50 percent over the past 75 years, and there are an estimated 20,000 to 40,000 Asian elephants left in the wild1.

The African elephant is the largest of all elephant species and can weigh up to eight tons2. There are two subspecies which are the African savannah and the African forest elephant, with a number of characteristics that differentiate them both. 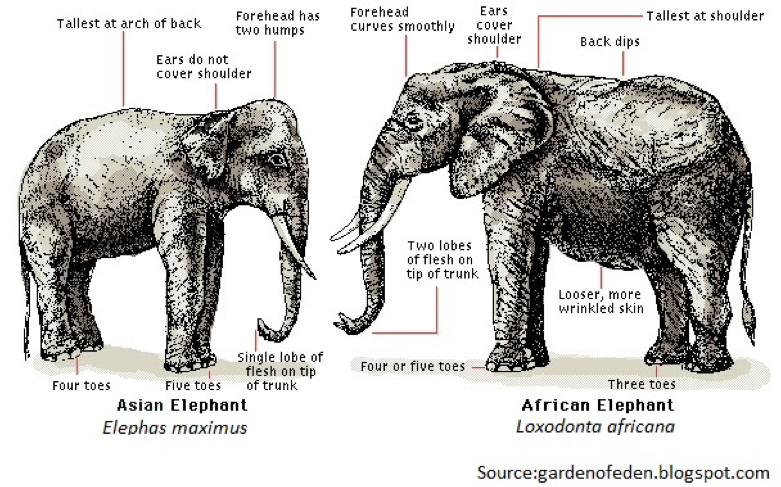 A herd of elephants is led by a matriarch, with a complex social structure of females and calves, while male elephants tend to live in isolation or smaller bachelor groups2. A female elephant may give birth to a calf every 4-5 years after a gestation period of 22 months—the longest of any mammal. Female calves may stay with their maternal herd for the rest of their lives, while males leave the herd as they reach puberty2.

A female elephant may give birth to a calf every 4-5 years after a gestation period of 22 months – the longest of any mammal. 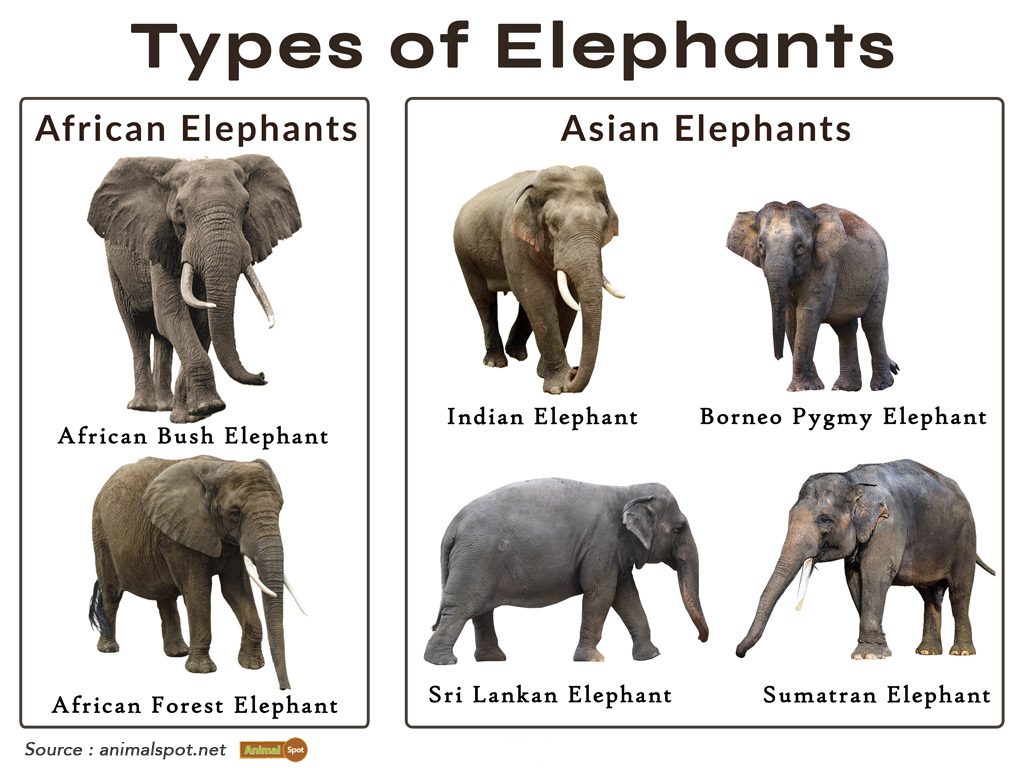 Elephants need extensive land area to survive and meet their ecological needs which includes food, water, and space. On average, an elephant can feed up to 18 hours and consume 300 hundred pounds of plant matter in a single day1,3. As they lose habitat, they often come into conflict with humans in competition for resources2.

Ivory poaching for tusks is the main reason why elephants have been so heavily hunted and for centuries ivory has been used to make billiard balls, piano keys1, identification stamps, decorative items and royalty gifts. In 1989, the Convention on International Trade in Endangered Species (CITES) banned the ivory trade, putting hunting outside the law4.

The World Elephant Day is celebrated on 12th August annually to bring attention to the urgent plight of Asian and African elephants. This year, the observed theme is: Bringing the world together to help elephants”.

The elephant is loved, revered and respected by people and cultures around the world, yet we balance on the brink of seeing the last of this magnificent creatures

Much positive progress has been seen in tackling illegal wildlife trafficking, but there is still more that needs to be done to ensure the elephants has better survival in the wild4. On this World Elephant Day, we hope to see even more commitment from the industries and the Malaysian citizens to ensure the survival of this species.

Governments, law makers, enforcement officers, customs officials and park rangers across every region are scaling up their efforts to protect wildlife. Everyone including the industry players has a role in protecting wildlife and its habitat. Our collective conservation actions can be the difference between a species surviving or disappearing

Elephants are also described as megagardeners of the forest because they are massive eating machines and excellent seed dispersers. As they consume more fruits from more species than any other large vertebrate, they disperse seeds by defecating them over long distances in viable conditions into nutrient – rich and protective dung3. Elephants play an important role in seed dispersal functions due to its large food requirement, broad diet, wide gape size and extensive home ranges4,5

In Peninsular Malaysia, the species is still widely distributed in the interior parts of the country. Pahang – might have the largest population, Perak, Johor, Kelantan, Terengganu and Kedah are also known habitat. The current elephant population in Peninsular Malaysia is estimated at 1223-1677 individuals6. In Borneo, elephants only occur in the lowlands of the north-eastern part of the island in Sabah and adjacent parts of Kalimantan, Indonesia. In Sabah, the elephant population estimated by Sabah Wildlife Department are 2,040 elephants5. 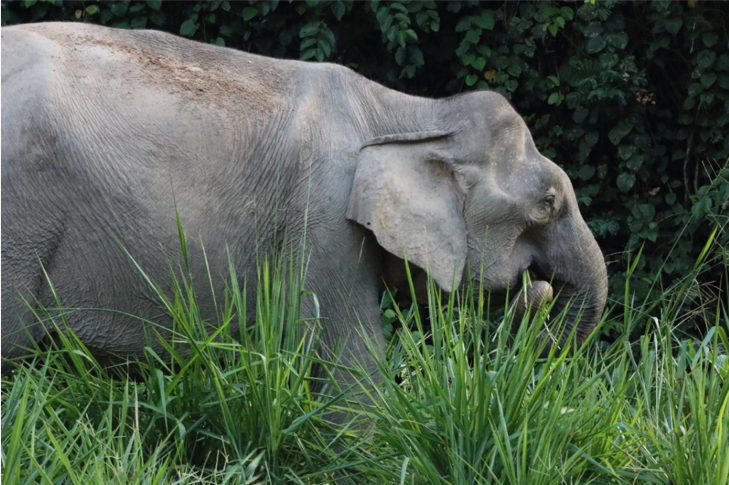 Distribution of elephants in Malaysia;

Habitat loss and fragmentation due to agriculture and development is the biggest threat to the continuing survival of Asian elephants5. The main cause of the loss of the natural forest is pressure from humans. Human settlements and agricultural encroachment near the ranges of the elephant habitat increases the pressure on elephant habitat. Shortage of food in fragmented forests can result in crop raiding and often cause damages to human settlements and agricultural crops7. Elephants and humans have currently come in increased contact, which leaves them in conflict most of the time. 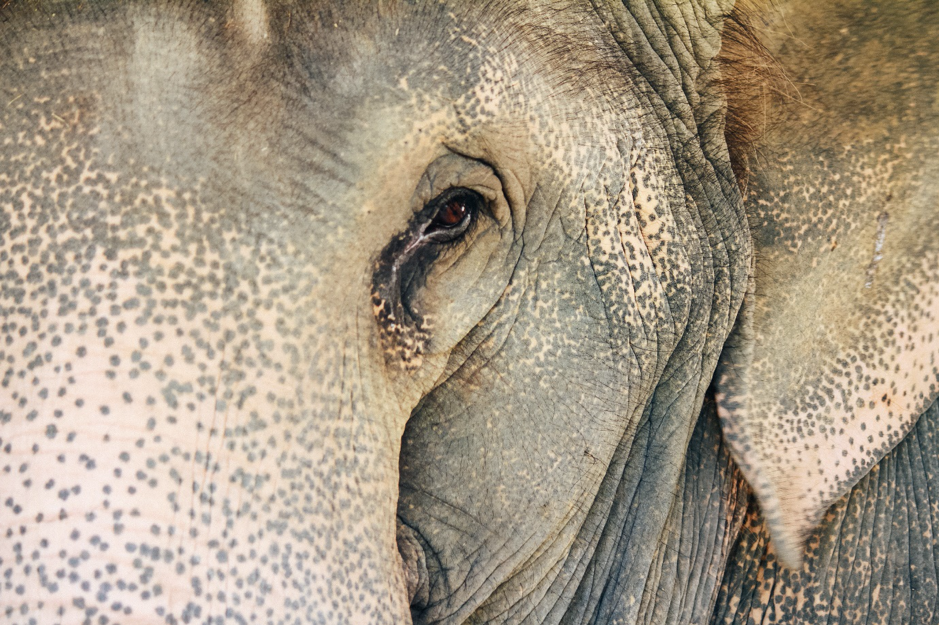 Acknowledging these concerns especially in the plantation landscapes, Malaysian Palm Oil Council (MPOC), through the Malaysian Palm Oil Wildlife Conservation Fund (MPOWCF) and currently rebranded as Malaysian Palm Oil Green Conservation Foundation (MPOGCF) organises forums and workshops to discuss the challenges on wildlife conservation, human-wildlife conflict and acceptable mitigation measures with other stakeholders. One of the recently organised workshop was held in Tawau, Sabah in November 2019 to identify and address issues in mitigating human – elephant conflicts, which was organised in collaboration with FELDA and FGV Holdings Berhad.

Human-Wildlife Conflict (HWC) is defined as interaction between wild animals and people which can result in negative impacts on people and/or their resources and on the wildlife itself as well as its habitat. The main cause of HWC are due to human activities such as land development and agricultural development.

The collaboration was participated by plantation stakeholders, Sabah Wildlife Department officers, MPOC representatives and smallholders from surrounding region of Lahad Datu and Tawau. At the end of the workshop, it was agreed that there is a need for7:

Elephants Again in Focus Through the MPOC-Organised “Biodiversity Conservation Webinar”

As part of the bi-annual International Palm Oil Sustainability Conference 2020 which will go virtual this year, and in conjunction with World Elephant Day 2020 MPOC is organising a ‘Biodiversity Conservation Webinar on Human and Wildlife Co-existence’. The webinar to be held on 12th August 2020, 3.00-4.30pm (GMT +8:00) focuses on conservation initiatives and efforts taken to address human-wildlife conflicts in the Malaysian palm oil industry landscape.

Sabah had  increased human-wildlife conflicts involving elephants. Wildlife Rescue unit (WRU) is involved in capturing and translocating elephants to wildlife sanctuaries for protection and conservation. As of 2017, WRU successfully translocated 266 Bornean elephants from conflict areas to designated wildlife refugia. WRU was established under the Malaysian Palm Oil Wildlife Conservation Fund (MPOWCF) in collaboration with Sabah Wildlife Department (SWD). The responsibilities of WRU includes rescue and relocation, research, public awareness, reduce human-wildlife conflict (HWC) and enforcement activities. It is important for all stakeholders to support WRU towards protecting and conserving biodiversity in Sabah. 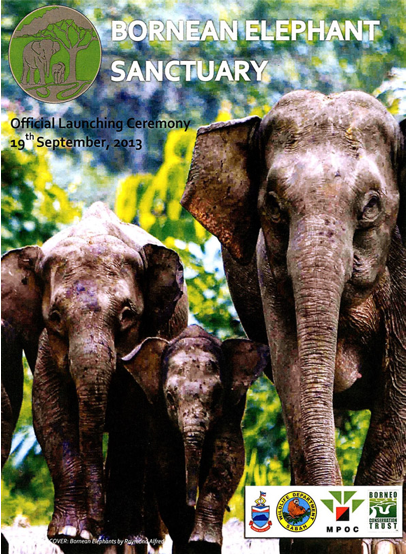 Sabah’s first and only Bornean Elephant Sanctuary (BES) was officially mooted on 19th September 2013. It is specifically designed to provide refuge for rescued elephants which are injured or orphaned. These elephants will be cared for and rehabilitated before being released back to the wild. MPOC is the prime funder for the BES, and is partnered with Sabah Wildlife Department (SWD), Borneo Conservation Trust, BCT Japan and its 12 corporate partners, including Asahiyama Zoo and Saraya Corporation.

Activities and programs during World Elephant Day concentrates in creating awareness among the general public and business corporations and calls for more funding and contribution for the protection and conservation of elephants. On this day Malaysian Palm Oil Council shares its stories and efforts of wildlife conservation especially elephants which is made possible primarily through its Malaysian Palm Oil Wildlife Conservation Fund (MPOWCF). Other companies from Malaysian palm oil industry which are involved extensively in wildlife conservation with elephants as one of their iconic species include Sime Darby Plantations Berhad, Kulim (Malaysia) Sdn Bhd, Genting Plantations Berhad and Sabah Softwoods Berhad.

Join worldelephantday.org  to view the activities and the many efforts throughout the globe on elephant conservation and protection. It is a day to express our concern, share our knowledge on elephants, share our efforts and support for solutions for the better care of captive and wild elephants alike. Such events reminds us on the effort and role of every individual, organization or corporations which pushes the species away from the brink of extinction and gives hope for a better future for the elephants and mankind.

We admire elephants in part because they demonstrate what we consider the finest human traits: empathy, self-awareness, and social intelligence. But the way we treat them puts on display the very worst of human behaviour.”