Palm Oil: Exactly Why It Gets Such A Bad Rap

Palm oil and its contribution towards global food security continues to be demonized and accompanied by much misinformation. The article by Juliette Steen via  http://www.huffingtonpost.com.au is one such example. Palm oil is a vegetable oil produced from the oil palm fruit. Malaysia and Indonesia are responsible for producing about 85% of the world’s palm oil, while other producers include Thailand, Columbia, Nigeria, Papua New Guinea and Ecuador. Palm oil is found in almost 50% of food products in the supermarket; from chocolates to biscuits and peanut butter to ice-cream, palm oil in its various fractions and derivatives are a common ingredient in these food products. In addition, oleochemicals derived from palm oil are also used in the production of personal care products, detergents and household cleaning products.

Why Palm Oil is Found in Many Products. 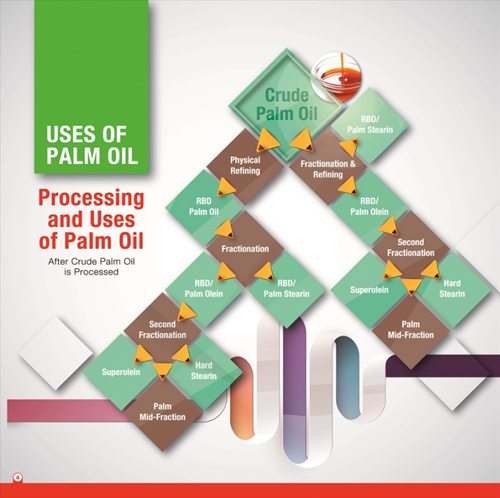 The usual misinformation on why palm oil is in almost half of the products that you purchase from the supermarket is considered superficial. Palm oil is a fruit oil and is Non-GMO. This is extracted from the flesh of the fruit or mesocarp while palm kernel oil is obtained from the oil palm seed (kernel). 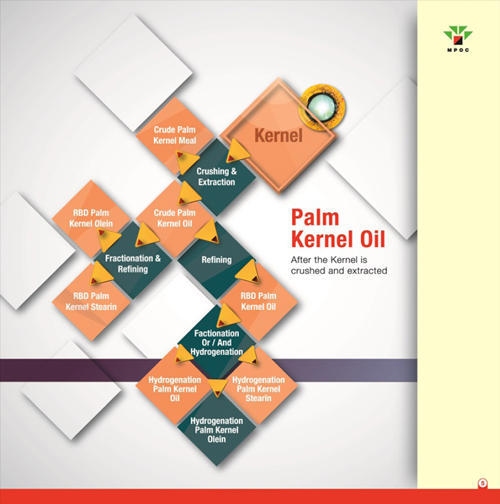 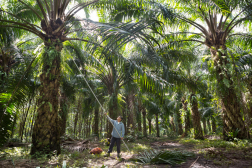 We agree that palm oil trades much cheaper than the other competing seed oils. However, cheap does not equate to poor quality or nutritional value. Oil palm is the most productive oil bearing crop and it yields 7 – 10 times more oil per hectare of land than all other oil bearing crops. The oil palm yields up to 10 times more oil per hectare than soy bean and 6 times more than rapeseed. The industry thus passes this price advantage to consumers, making palm oil the most affordable edible oil in the global market. This fact also helps to ensure global food security.

Misquote 2: Palm Oil Drives Wildlife Toward Extinction
What Lain Pin Koh mentioned to Huffpost Australia is nothing new when comes to the allegations by the environmental NGOs. The palm oil industry is continuously accused of driving wildlife species to the brink of extinction and the Orangutans has always been in the centre of attention.
The truth of the matter is as follows;

i) Malaysia Is Green And Growing
Malaysia is a developing country which heavily relies on its natural resources for economic development and has honoured its pledge made at the Rio Earth Summit 1992 to uphold 50% of its land under forest cover. Recent Malaysian forest hectarage as published in the Global Forest Resources Assessment (FRA) 2015 report (United Nations Food and Agriculture Organisation) reported that Malaysia currently maintains 22,195,100 ha or 67.6% of its total land area as forest. This is significantly higher than a country like Australia with only 16.2% of its land mass under forest.

According to Vegan Australia (http://www.veganaustralia.org.au), 56% of the Australian continent, which accounts for 429  million hectare has been extensively modified for animal husbandry with livestock grazing (mainly for cattle, sheep and dairy) on native or modified pastures while only 3.5 % (about 27 million hectares) of the land is used to grow food crops for humans. Malaysia (5.64 million hectares) and Indonesia (8.63 million hectares) collectively cultivate only 14.27 million hectares of oil palm which is a mere fraction in comparison to Australia’s exploitation of its land mass. This is an important fact that most Australian ecologists and consumers fail to acknowledge before pointing fingers at palm oil producing nations. Vegan Australia also quoted that, land used for grazing often originated from forests or woodlands which were cleared or burnt to make it more suitable for cattle and sheep grazing.

ii) Malaysia Has a Strong Policy Aimed at Protecting Its National Biodiversity
Malaysia is a country which gives high priority towards conservation of its mega-biodiversity and no single species is left behind. The launch of the revised National Policy on Biological Diversity emphasizes continued conservation by providing direction and framework in conserving the nation’s biodiversity in the face of increasing challenges. The policy strongly calls for active participation by all stakeholders which compliments Malaysia’s obligation under the United Nations Convention on Biological Diversity and aims to implement the Sustainable Development Goals. 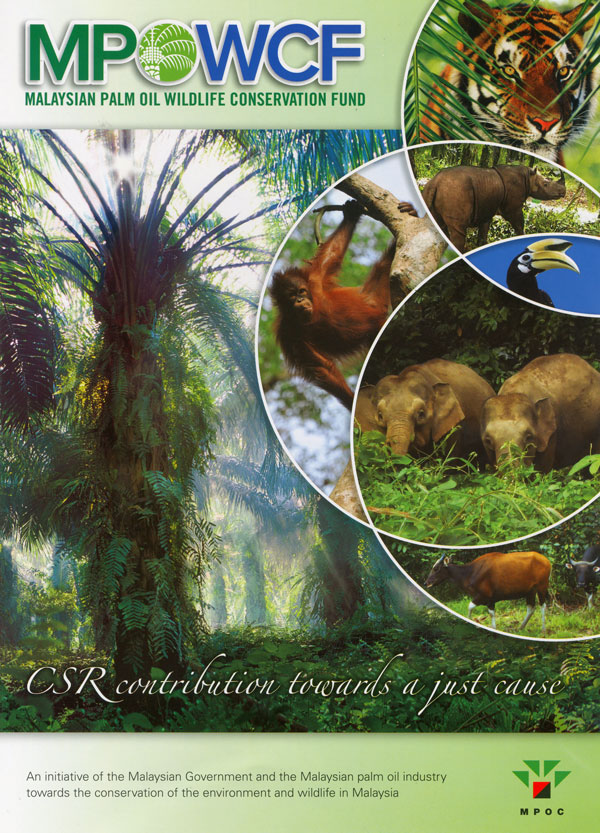 i) Palm Oil Is Not The Cause of Worst Mammal Extinction
There has been incidences where Australian zoos launched several anti-palm oil campaigns to further denounce the reputation of the palm oil industry. Narrow-minded ecologist failed to acknowledge the local issues plaguing their wildlife and biodiversity but busy meddling with environmental impact in a different continent and distracts the conservation focus needed from its people. Australia is one of the earth’s “Megadiverse” nations and home to more species than any other developed country. Conservation becomes more crucial with most of Australia’s wildlife are endemic but it is sad to know that Australia has the worst mammal extinction rate in the world. The primary factors are feral animals, wildfires, weed invasion and loss of native vegetation (http://www.australianwildlife.org). Australians have been too busy worrying about Orangutans which have better chances of survival with high commitment from the Malaysian government and many conservation programs in place compared to the Australian wildlife such as the “Mala” and “Numbat” which are dwindling in numbers.

Misquote 4. Palm Oil Has Over 200 Alternate Names .
Palm oil can be fractioned into olein and stearin due to the different melting points of its tryglicerides. Depending on the manufacturer’s requirements, this fractionation process can be further applied on these two products to give various other downstream products such as super olein and various palm mid-fractions. Similarly, palm kernel oil is fractionated to give palm kernel olein and palm kernel stearin. Each palm oil fraction is recognized through standards depicted in CODEX Alimentarious, Food and Agriculture Organisation (FAO) and the World Health Organization (WHO) for named edible oils. Thus everything used in foods (and even non-foods) is properly standardized and defined. There should not be any confusion even when these products are named prominently on food labels. The producers and manufacturers have nothing to hide and welcomes proper labeling of all palm oil, its fractions and products incorporated into food formulations. Thus 200 alternate names is sheer absurdity.

Misquote 5. Palm Oil Is An Unhealthy Oil For Us To Eat. 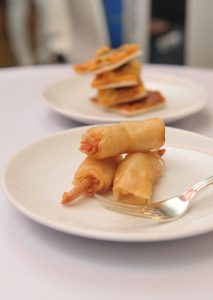 Palm oil is recognised as a wholesome and nutritious edible oil suitable for human consumption by CODEX Alimentarious. Palm oil has a balanced fatty acid composition, between its saturated and unsaturated fatty acids, and high content of vitamin E tocotrienols and tocopherols. Crude and red palm oil are also rich sources of pro-vitamin A carotenoids. The main saturated fatty acid in palm oil is palmitic acid, which is the same form of saturated fatty acid that is most abundant in our body and in human breast milk. Palm oil is the most common cooking oil used throughout Asia and more than 300 scientific publications on palm oil in animals, cell cultures and human dietary intervention studies are available. In several human studies conducted by reputable research laboratories around the globe, scientists have found that palm oil consumption has a relatively neutral effect on blood cholesterol and shown to increase the “good” HDL-cholesterol. Palm olein, which is the liquid fraction of palm oil, is also equivalent to olive and canola oil for its effects on blood cholesterol. An Italian group of researchers led by Prof. Elena Fattore from Mario Negri Institute for Pharmacological Research in their publication in the American Journal of Clinical Nutrition (AJCN) have documented all published palm oil human studies and concluded that the consumption of palm oil does not pose a threat as far as effects on blood lipids and coronary heart disease risk are concerned. 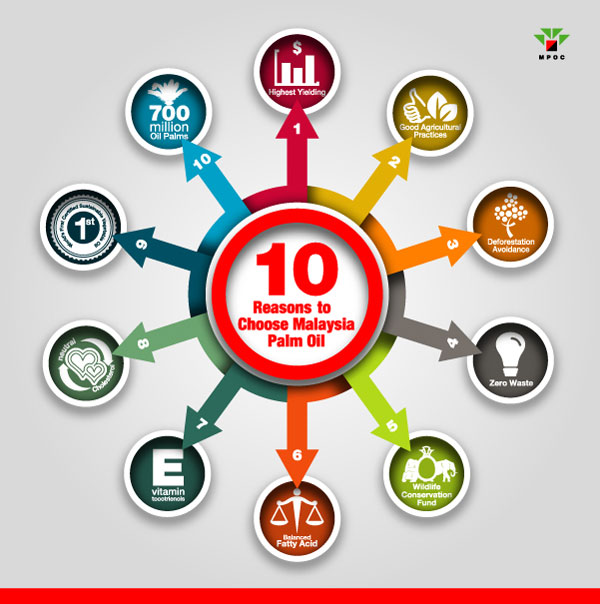 Avoiding Trans Fat With Palm Oil
Our modern daily diet often does not meet the recommendation for optimum nutrition. Increasingly, processed food are recognized as high in sugary carbohydrates which are a threat to our health and well-being. There is more evidence now to suggest that consumers should focus on reducing trans fat and sugar among others, in our diet which promotes heart disease and leads to other health problems such as diabetes and obesity. One of the important factors which enables food manufacturers to use palm oil in their products is to replace partially hydrogenated unsaturated oils which contains trans fatty acids.

Misquote 6 Avoid Palm Oil Products To Get Closer To A Solution.
There has been some major calls to boycott palm oil initiated by overzealous anti-palm oil groups. Consumers are constantly made to believe that boycotting palm oil is the solution to stop its domination in the global oils and fats industry. Two of such examples are “Say No To Palm Oil” and “Don’t Palm Us Off”, calling all stakeholders to reflect on the environmental and health concerns associated with its consumption. The motion put across on boycotting palm oil to save the world’s endangered biodiversity is totally wrong and unfortunately the impact may be worse. Lobbying manufacturers to use other types of oil to substitute palm oil will significantly increase land used to grow and produce alternate edible oils. Oil palm is an efficient crop which produces up to 7-10 times the yield of alternative vegetable oil crops. The need and use of more land will directly increase deforestation and species loss if palm oil is avoided.

Certified Sustainable Palm Oil
Certified sustainable palm oil provides consumers with environmentally friendly options. Palm oil is certified by organizations such as the Roundtable on Sustainable Palm Oil and the German ISCC using guidelines and criteria that include elements addressing deforestation, habitat loss and social conflict. There are also other certification schemes implemented by the government of major palm oil producing countries. Malaysia has established its own certification scheme where the national standard on sustainability. This standard, Malaysian Sustainable Palm Oil (MSPO), ensures compliance in accord with  Malaysian laws and ratified international agreement and conventions. The standard also encompasses the 3 pillars of sustainability. Certification enables sustainable production and verification along the supply chain for palm oil and ensures the end products are certified too. Consumers play a major role in ensuring that this trend will increase, to improve the industry and the supply chain.

Palm Oil Is Here To Stay
Palm Oil is an important commodity in the global oils and fats market and it is an essential vegetable oil for ensuring global food security. Malaysian palm oil is produced sustainably and responsibly while complying to existing national regulations, complemented with best practices and plantation management, without neglecting the environment and its services. Malaysian palm oil is important in supplying the world’s requirement for affordable oils and fats compared to other edible oils. Malaysian palm oil industry’s sustainability policy and certification system ensures the production and the availability of high quality palm oil in the global market.

It is time that consumers are better informed using true and trusted facts and not mislead by significant misquotes such as in the article “Palm Oil: Exactly Why It Gets Such A Bad Rap”.